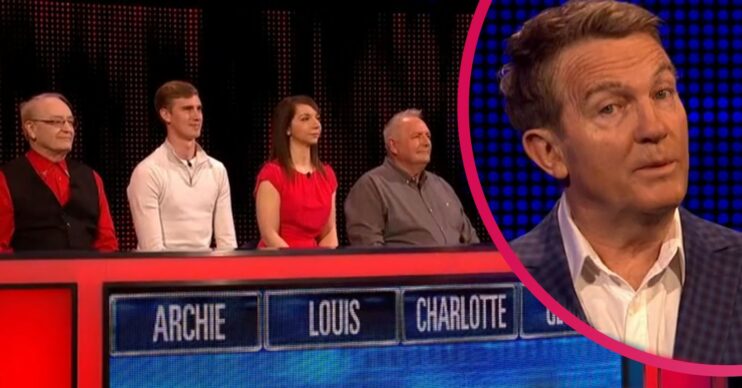 The Chase viewers left in hysterics over ‘royal’ episode

ITV viewers were stunned when they spotted it

ITV The Chase viewers were in for a surprise last night (September 7) when they tuned into ITV and saw Archie, George, Louis and Charlotte.

As a result, some viewers were quick to spot something hilarious about the names of the contestants.

Some pointed out that they all shared the same names as the Queen‘s great-grandchildren.

The couple also have Prince Louis, and their only daughter, Princess Charlotte.

“Blimey, the children of the Royal Family have all grown up already,” laughed one fan.

“All the Royal grandkids!” pointed out a third.

Meanwhile, a fourth said: “Today’s contestants: George, Charlotte, Louis and Archie… are you kidding me?”

However, while viewers were quick to spot the connection, spare a thought for host Bradley Walsh who was completely oblivious.

Host Bradley, on the other hand, failed to spot the toyal theme and it was left up to The Governess to break the news to him.

Anne said:  “You haven’t worked out what all these people have in common, have you?”

A confused Bradley said: “Oh, have I done it again?” before it finally clicked.

Sadly for the contestants, their royal connection wasn’t enough to help them win the prize money.

After making it through to the final chase with £12,000, Anne managed to catch the group with 30 seconds still left on the clock.

Do you spot the royal connection? Leave us a comment on our Facebook page @EntertainmentDailyFix and let us know.