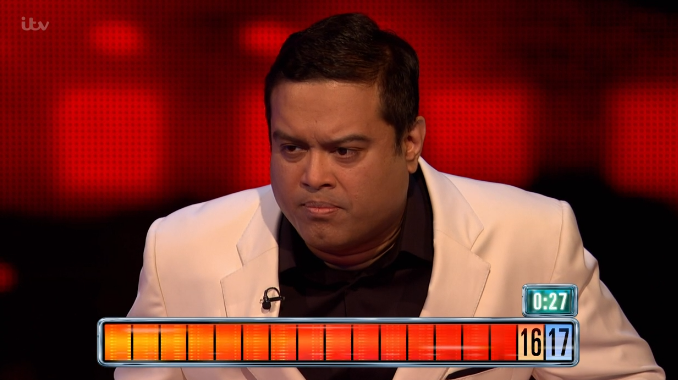 He beat the team with 24 seconds remaining

Viewers of The Chase think the Chaser had “easy” questions on tonight’s show (Friday, March 27).

Kay bagged £3,000 in her cash builder but decided to go for the high offer.

When asked how she would spend any money won on the game show, Kay admitted she wants a Chanel purse and to give her husband Roger a facelift.

Wow he’s getting them right easy for him tonight.

Kay managed to beat The Sinnerman and added the £30k to the team’s prize fund.

Her teammates John and Sally were up next and they played for £3,000 each.

Both players beat The Sinnerman and made it back to the team.

Unfortunately, The Sinnerman caught them with 24 seconds remaining.

Viewers were gutted for the team and some thought the Chaser had easy questions.

One person said on Twitter: “Some easy questions there for Paul.”

Another commented: “Wow he’s getting them right easy for him tonight.”

One tweeted: “Easy win for the Sinnerman it would appear.”

#thechase some easy questions there for Paul

Easy win for the Sinnerman it would appear 😪😪😪 #thechase

Elsewhere, many fans were left gushing over John.

One person said on Twitter: “Okay, this guy is one of the fittest guys I’ve ever laid eyes.”

Another wrote: “Is anyone else licking their TV screen? It’s been a long week.”

A third added: “Anyone know where we can find John from tonight’s The Chase on Twitter or Instagram, I need to see more,” followed by heart eye emojis.

Okay, this guy is one of the fittest guys I've ever laid eyes #thechase

Is anyone else licking their TV screen? It’s been a long week 😂 #TheChase #John pic.twitter.com/XYnLDVjHpa