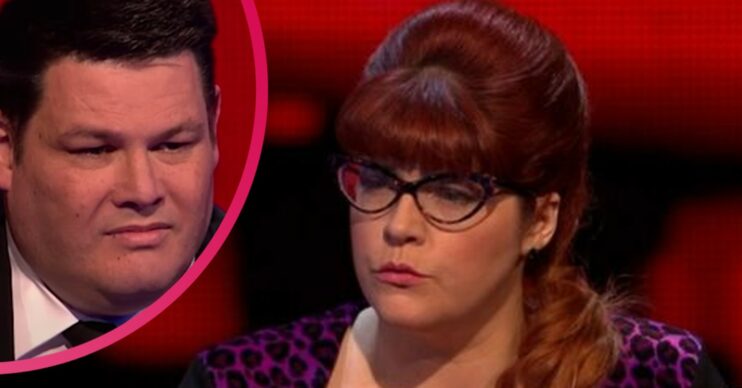 The Chase: Mark Labbett defends Jenny Ryan after ‘bad day at the office’

ITV fans were baffled by the result

Mark Labbett jumped to the defence of Jenny Ryan after yesterday’s episode of The Chase.

Jenny had a rough time of it on Tuesday (September 14), and viewers were surprised to see the normally competent star struggling.

The Chaser only managed to score 11 points during the Final Chase.

This meant that the contestants, who had answered 15 questions correctly, managed to take home the prize money.

Fans rushed to social media to question why Jenner had performed worse than usual.

Jenny Ryan on The Chase

“How the heck did that happen? Beating Jenny with 15 steps? Have to say I’m rather surprised, not like her!” said one viewer.

A second tweeted: “Bad day at the office for Jenny. We all have them.”

“Jenny and Bradley must’ve had a session down the pub before they recorded this episode,” joked a third.

Jenny had a mare !!! #thechase

After seeing remarks from fans, The Chase star Mark rushed to Twitter to defend his co-star.

He insisted that her loss was purely down to “horrible questions”.

He said: “Any chaser can be made to look bad with a horrible set of questions #thechase.”

Meanwhile, another added: “@jenlion was very gracious in defeat it was a horrible set on both sides.”

She joined her co-stars to pick up the award for Best Quiz Game Show for Beat The Chasers.

However, all eyes were on her incredible new look.

After the ceremony, she told fans: “Thank you so much to everyone who voted for Beat the Chasers in the NTAs – we really appreciate it.

“And thank you to these incredibly skillful and talented people for helping me get GLAM… in fact, so glam that nobody recognised me!”

Are you a fan of Jenny from The Chase? Let us know by heading to our Facebook Page @EntertainmentDailyFix and leaving a comment!