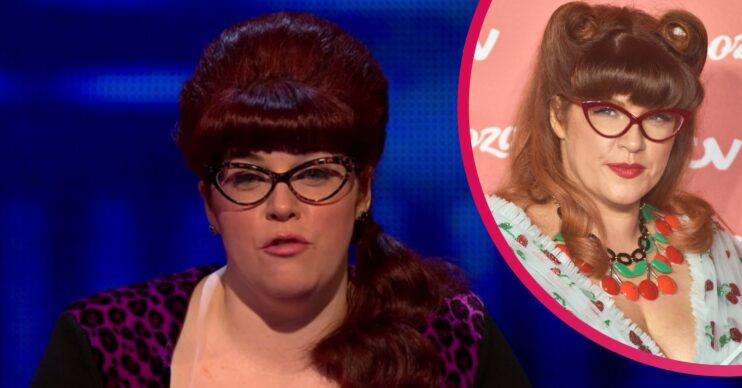 Jenny Ryan, aka The Vixen on The Chase, hit back at a troll who branded her unattractive yesterday evening (Wednesday, March 30).

The 39-year-old quizzer launched into an impassioned rant on Twitter – and fans were firmly on her side.

What happened to The Chase star Jenny Ryan?

Jenny was subjected to some abuse by a cruel troll on Twitter yesterday.

However, she wasn’t going to just let them get away with it that easily.

The 39-year-old shared a screenshot of what the troll had tweeted at her with her 108.1k followers.

It read: “@jenlion being patronising, sarcastic, and rude to the contestants on The Chase is not an attractive feature.”

In response to the tweet, Jenny wrote: “Well, isn’t it great that my job isn’t to be attractive?”

“At least, not to be attractive to this guy,” she added.

What did The Chase star say next?

Jenny continued slamming the troll over the course of her next few tweets.

“In seriousness, would the OP tweet this to any of my male colleagues?” she asked.

In the next tweet, she wrote: “It’s infuriating that in 2022 CE I’m still being primarily judged on whether some random man on the internet wants to bang me (based on some Victorian ideal of the meek and mild woman, apparently) rather than how good I am at my job.”

“Side note: I’m rarely patronising, let alone sarcastic or rude to the contestants,” she added.

Plenty of her 108.1k followers took to the replies to show their support for the 39-year-old quizzer.

How did Jenny’s fans react?

Plenty of Jenny’s sided with her following her rant slamming the Twitter troll.

“You’re not Jenny, you are a really lovely person. I think you say things as they are.You are The Vixen, a strong and smart Chaser. Ignore them they are just so jealous of you – stay strong,” one of her followers tweeted.

“I think you’re great Jen, you’re very fair and praise them when they’ve done well, and make a witty quip when they don’t,” another said.

“You’ve always come across as kind and polite and the odd quip you make is part of the Chaser role you’re playing,” they continued.

“You always strike me as very gracious and encouraging if anything!” a third wrote.

“I love you… even tho you did me out of 10 grand on Beat the Chasers,” a former contestant joked.

“We love you Jenny,” a fifth said.