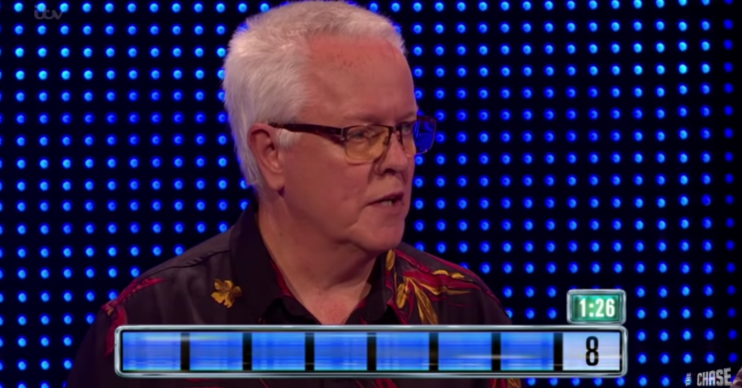 The Chase viewers call out contestant as he apologises to team

The Chase viewers have called out an ITV contestant for taking the minus offer.

On Monday night’s episode, one of the three remaining contestants of the ITV quiz show, Les, decided to play the game tactically, to the detriment of the other two.

The retired Church of England minister was up against Paul Sinha, and after a lacklustre cash builder, decided to take the lowest offer of -£3000.

Teammates Jascha and Lynette were left stunned at the 69-year-old’s bold move, while The Sinnerman himself couldn’t let it slide.

Shocked by Les’ decision, he commented: “He’d have got back if he’d just taken the middle offer.

“He clearly came in with a plan that he was going to take the minus offer no matter what – and that’s not gameplay.”

Les then apologised to his teammates when he got back to the podium.

But it wasn’t enough to win over the public, who flocked to Twitter to air their frustration.

One person said: “Someone has just taken the minus offer on the chase. Disgusting behaviour.”

Another added: “Minus offer, how can you go home and look your wife and kids in the eyes after that.”

“Disgusting behaviour taking the minus offer on the chase, couldn’t be me,” a third tweeted.

Although Les did redeem himself slightly in the final round, it was Jascha who stole the show, answering most of the questions right.

Paul was no match for them and the players won the £12,000 jackpot.

As he congratulated them, Paul joked: “I still think you’re a coward, Les, but well played.”

What did you think of Les’ gameplan? Head to our Facebook page @EntertainmentDailyFix and let us know.