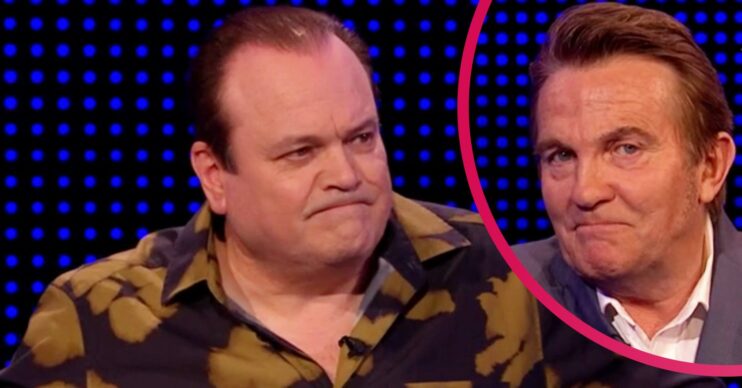 Impressed viewers of The Chase have begged ITV to install Shaun Williamson as a Chaser on the quiz show.

Ex EastEnders star Shaun, 56, has aced it when previously appearing in a celebrity episode of the ITV series. And he has also won big before on spin off show Beat The Chasers, bagging £120,000.

However, following another stunning performance during Friday’s (June 10) special for Soccer Aid, fans reckon it is time for Shaun to become a permanent fixture on The Chase.

Who else was on Shaun Williamson’s team?

Shaun was just one member on his team of celebs. But fair to say the Barry Evans soap star was their lynchpin for success.

He played alongside sporting stars David James, Lianne Sanderson and Dion Dublin. And even though they were all demonstrating the kind of competitive spirit that made them thrive as pros, the sports standouts hailed Shaun as their main player.

Not only did he contribute an enormous £132,000 to the jackpot, Shaun was also instrumental in pushing Chaser Darragh Ennis back in the final round.

Dozens of fans watching at home made the case on social media for Shaun to join the likes of The Dark Destroyer and The Beast in the line up of Chasers.

Shaun Williamson needs to be made a Chaser.

“Shaun needs to become a Chaser #TheChase,” suggested one viewer on Twitter.

Another tweeted similarly: “I think Shaun Williamson needs to be made a Chaser. My suggested nickname would be ‘Not Barry from EastEnders’ #TheChase.”

“Please, can Shaun be a full time Chaser? No [blank] would *ever* win,” added a third person.

And yet another enthused: “Bloody brilliant! Honestly, Shaun should be made a Chaser. #TheChase.”