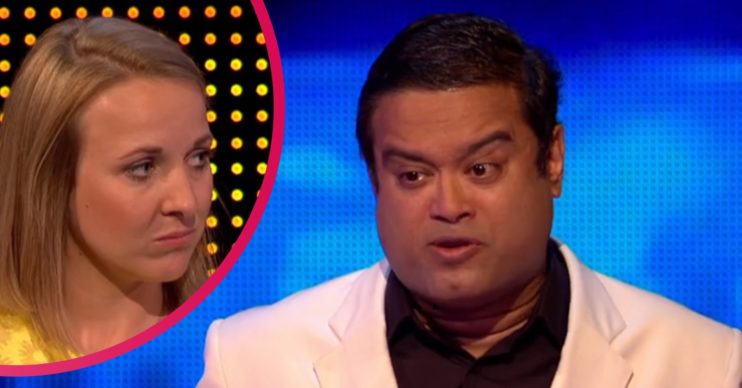 The Sinnerman commended them afterwards

The Chase viewers were stunned last night as contestants on the programme put in a ‘terrible’ performance in the final round.

What happened on The Chase – and did Paul think they were ‘terrible’?

Things were looking up towards the end, as all four of them made it to the final round to play for an impressive pot of £21k.

And because they had the full team together, as per the rules they were given a head start of four steps.

“That’s a massive advantage, you’ve got to make that pay,” host Bradley Walsh told them.

But when the team took their turn at the final chase, they managed to give just 11 right answers between them.

That was pretty poor!

One of the questions they got wrong was: “A traditional thermometer is divided into which units?” They said, “Celcius?” but the correct answer was, ‘degrees’.

Another was: “In what country is the city of Shiraz?” The team said, “Spain” but it was, ‘Iran’.

Paul said, as he came back into the studio: “It was a mixture of great answers, poor misses, bad luck, good luck. It was a real hodge-podge… but that’s what you’re about to get from me, I suspect as well.”

For The Sinnerman, 15 was an all-too-easy score to beat – and he did so, with 20 seconds remaining.

Reacting on Twitter, viewers said it was a “terrible” performance from the contestants, as they expected a team of four to do much better. Some even thought the questions were ‘easy’.

One said: “Well, that was pretty poor! #TheChase.”

Another wrote: “Too many of them. All waiting for each other #TheChase.”

A third put: “15 correct with four people is terrible #TheChase.”

Well that was pretty poor!! #TheChase

Too many of them. All waiting for each other #TheChase

15 correct with 4 people is terrible #TheChase

Someone else tweeted: “They should have done way better than that #TheChase.”

A fifth said: “They wasted too much time looking at each other, it was all over the place…”

“Antonia did OK, really,” another said. “But they really missed some easy ones.”

One viewer, praising Paul, said the whole team was “clueless”.

They wasted too much time looking at each other, it was all over the place…let’s hope the chaser is off but I doubt it #TheChase

After his victory, Paul told the team: “Every so often I say this, it’s really difficult under pressure.

“Well played, you were a really, really good team.”