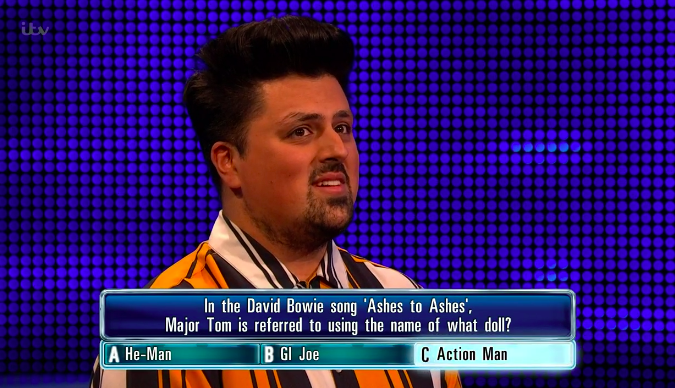 He knew how to play the game

Viewers were left angry as one contestant, who didn’t manage to put any money into the Cash Builder, ended up winning big on The Chase tonight (Tuesday 3 March).

Fans of the ITV show took to social media to share their thoughts on dentist Bhagwan’s performance.

Tonight’s team, which also included Maureen, Paul and Laura, were up against Governess Anne Hegerty.

Bhagwan went bold in his choice of striped shirt, while his large, slicked back quiff reminded several people on Twitter of a couple of popstars. Some said he was the spitting image of Bruno Mars, while others recalled legendary rock’n’roller Elvis Presley.

But the dentist failed to put any money into the Cash Builder, blundering through his round.

He confessed he was nervous, which probably explains why he thought that going on the Caledonian Sleeper from London to Scotland meant going on a motorbike!

It was up to Paul and Laura to put £12,000 in the pot, after Maureen had gone home with nothing.

Bhagwan also failed to add any money to the prize fund. He accepted the Governess’ offer of zero during his quickfire questions. But somehow he managed to get himself back to the team of three for the final.

His confidence was also growing as he quipped that if a king wears a crown, then a certain president wears a wig!

In the final, the trio correctly answered an impressive 20 questions between them before their time was up.

At last, there was some praise for the dentist on Twitter, even if he hadn’t contributed much in the way of cash.

People slating Bhagwan; saying he did nothing ,,, he got 3 points during the final chase , helping to make them win ! Don’t hate ! #thechase

However, others weren’t happy with him taking home money despite gaining nothing in his cash builder.

One person said: “Well blow me sideways they won. Bhagwan got £4,000 for doing… Well not much.”

A third added: “They brought the money back, he brought nothing back, now have to split the money with him,” followed by an angry face emoji.

Well blow me sideways they won. Bhagwan got £4,000 for doing… Well not much #TheChase pic.twitter.com/5uLuenM7BG

they brought the money back, he brought nothing back, now have to split the money with him! #thechase 😠

Anne attempted to explain her poor performance saying: “I didn’t do anything wrong except I was just too slow.”

As always, she was gracious in defeat, although one viewer thought she may have been making a sneaky dig in her analysis of the game…

Biggest backhanded compliment ever from Anne. “Well done Bhagwan for not getting in the way” 😂 He was bloody useless TBF #TheChase

The Chase continues tomorrow at 5pm on ITV.