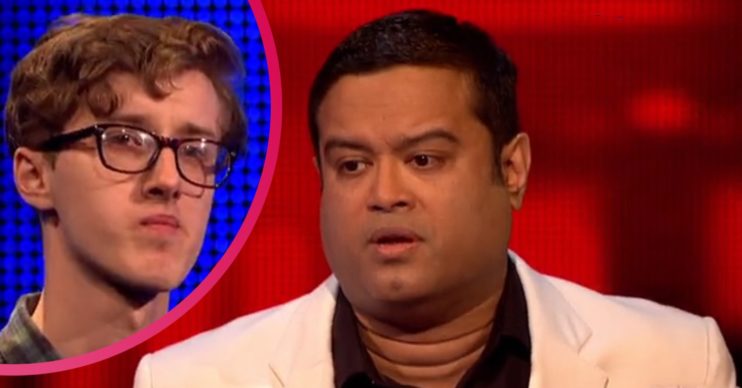 The Chase contestant leaves teammates ‘fuming’ after he passes

Viewers warned him to watch out!

The Chase fans warned contestant Alfred to ‘watch out’ last night as he kept passing on answers in the Final Chase.

Chaser Paul Sinha had very little trouble taking down the team with eight seconds to spare on Monday’s outing of the quiz (July 27).

But the win seemed to leave some of the team annoyed.

How did the team get on on The Chase?

Youngster Alfred had banked £4000 in his cash builder round and managed to hold on to it during his one-to-one with The Chaser.

Two other contestants, Frances and Wendy, also made it through.

The team banked a total of £17,000 between them and went into the Final Chase to ensure they could take their share home.

What happened on the Final Chase?

During the Final Chase Alfred was seemingly a little trigger happy on the buzzer.

The only problem was he kept passing on the answers! When he did answer, he didn’t have a great track record of getting many right.

When Wendy and Frances were able to get in there first, they did pretty well with the answers.

The team managed to reach a total of 18 points, but it wasn’t enough and The Sinnerman beat them.

As host Bradley Walsh asked if they’d had a good day in spite of their loss, they all said (through gritted teeth!) they’d had a lovely time.

Fans of The Chase blamed Alfred for the loss.

Many thought he had better watch out because it looked like Wendy and Frances were furious with him for all the passes.

Sorry but if Alfred hadn’t have passed so many they might have won. Selfish boy. #TheChase

Wendy will throttle Alfred when they get back stage ! #TheChase

Had a good day Alfred?
Pass#thechase

It was at this point that Alfred went into hiding. And I’m gonna do the same until tomorrow! ✌️ #thechase pic.twitter.com/5Fu0Jg9wFx

Don't think Francis and Wendy are a fan of Alfred #TheChase

Alfred is too "Pass" happy. #TheChase

Easy questions on The Chase

Meanwhile, some viewers were annoyed The Chaser seemingly got easier questions than they did.

They insisted it wasn’t fair – so maybe it wasn’t all Alfred’s fault!

One wrote: “Contestants always get killer, hard questions. Chaser gets ‘Where on the body would you wear a hat?'”

“Chow Mein is served in what type of restaurant?? A five year old could answer that, and a basic medical question for Dr Sinha, that’s fair!” added one more.

A third wrote: “Ridiculously easy question for the Chaser. The 4s is a model of what Apple smartphone? Seriously??? What other kind of phones do Apple make??”