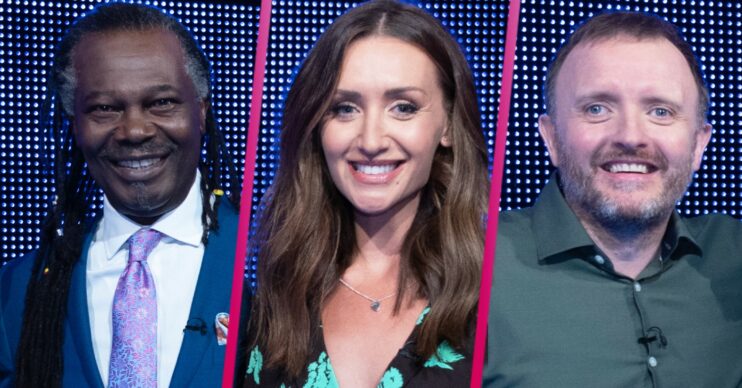 The Chase Celebrity Special – who are the famous contestants taking part in episode three?

And will they beat The Chaser?

Bradley Walsh hosts another celebrity edition of The Chase this Saturday, so who’s in the cast of The Chase Celebrity Special?

This weekend, another four famous faces test their wits against one of the ruthless Chasers.

But who are they? And do they stand a snowball’s chance in hell of beating The Chaser?

Here’s everything you need to know about this Saturday’s episode (November 20 2021).

It’s season 12 of the starry edition of the popular quiz, so viewers should know what to expect by now.

So we’re in for a treat!

Catherine Tyldesley, Levi Roots, Chris McCausland and Rick Wakeman all step up to face The Chaser.

They must work as a team and play strategically to answer general knowledge questions against the clock.

Will they be able to race down the game board to the exit without being caught by one of the ruthless Chasers?

They stand to winning a potential prize pot worth thousands of pounds for their chosen charities.

The Chase Celebrity Special cast – who is Catherine Tyldesley?

Catherine Tyldesley, 38, is a singer and actress who’s been on our TV screens since 2006.

She is most famous for her role as Eva Price on Coronation Street.

Catherine played the long-suffering barmaid from 2011 to 2018.

The actress is also known for playing Iris Moss in the BBC drama Lilies, Psycho Sarah in Scallywagga, Abi Peterson in Emmerdale, and Emma in Trollied.

Most recently, she portrayed Sara in Channel 5 drama 15 Days, Karen Norris in BBC One sitcom Scarborough, and Kate Tuckman in Viewpoint.

She popped up as herself in The Holden Girls: Mandy & Myrtle, too.

In 2019, she danced her socks off in the 17th series of Strictly Come Dancing.

Catherine is currently pregnant with her second child, with husband Tom Pitfield.

Who is Levi Roots on The Chase?

The 63-year-old came to widespread recognition when he appeared on Dragons’ Den in 2007.

He gained £50,000 funding for his now famous Reggae Reggae Sauce.

In 2010, Jamaican-born Levi Roots stated that the value of the brand was worth £30 million.

He’s also opened restaurants, published books and had his own TV show Caribbean Food Made Easy on BBC Two.

As a musician, he has performed onstage with James Brown and Maxi Priest and was nominated for a Best Reggae Act MOBO award in 1998.

He was a friend of Bob Marley, and has even sung for Nelson Mandela.

In February 2018, he even tried his hand at acting when he appeared in the seventh series of Death in Paradise as Billy Springer.

The Chase Celebrity Special cast – who is Rick Wakeman?

Rick Wakeman CBE, 72, is an English keyboardist and songwriter.

He is best known for being in the progressive rock band Yes between 1971 and 2004.

He has also released his own solo albums – over 90 in fact.

The musician has made many TV and radio appearances over the years, and became known for his contributions to the BBC comedy series Grumpy Old Men.

In 2011, MusicRadar included Wakeman among “the 27 greatest keyboard players of all time”.

Rick Wakeman has been married four times and has six children.

Who is Chris McCausland?

Chris McCausland, 44, is a Liverpudlian comedian and actor.

TV audiences probably know him best for his role as Rudi in the CBeebies show Me Too!

As a rising stand-up comic, he came third in Channel 4’s So You Think You’re Funny competition.

In 2014, he starred in the Jimmy McGovern drama series Moving On, and has even appeared in EastEnders.

Chris McCausland is blind due to retinitis pigmentosa.