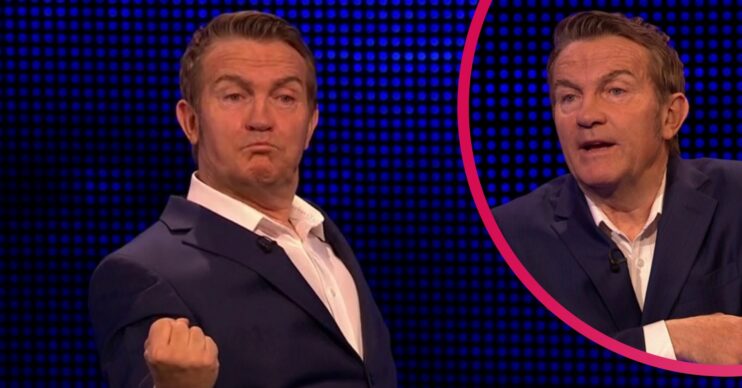 Bradley antics got under some people's skins

Some even went so far as to describe Bradley’s behaviour as being “despicable”!

What did Bradley Walsh do on The Chase yesterday?

Many viewers of The Chase found themselves getting frustrated with host Bradley during yesterday evening’s episode.

The show usually has just four contestants taking on the Chaser – however, yesterday Bradley decided to get involved in the game too.

Tuesday’s episode saw John, an electric engineer from Kent, go up against Mark Labbett, aka The Beast.

John was in the middle of deciding how much money to go for when facing off against The Beast when Bradley got involved.

“Yeah, and that’s why you’d be out in about two minutes,” The Beast replied.

Bradley wasn’t having any of that and decided to make a bet with The Beast.

The Beast was happy to accept Bradley’s challenge.

“I’ll give you a tenner if you make it home for the high offer,” The Beast said, a wager which Bradley agreed to.

John then went up against The Beast, with Bradley tagging along too. At one point, The Beast had to remind an overexcited Bradley that John was the priority here.

John beat The Beast and walked away with his £11,000, however, Bradley never knew if he’d won his £10 as the round ended.

What did viewers say about Bradley Walsh on The Chase yesterday?

Whilst those in the studio saw the funny side of Bradley joining in on the game, many viewers at home didn’t. Some accused the 61-year-old of overshadowing John during his round against The Beast.

“Brad taking the shine off John,” one angry viewer tweeted.

“I know it’s for fun, but this isn’t fair on John, Brad,” another said.

“I wish Brad would stop trying to make the show all about him. It’s not about you Brad, just shut up and support the contestants,” a third wrote.

“Despicable behaviour by Brad Walsh acting the fool there in front of the contestant who is trying to concentrate! These people are playing for money that may in a small way change their lives,” a fourth angrily said.

However, some viewers enjoyed Bradley’s performance on the show.

“Bradley Walsh, playing along for a tenner off The Beast. Marvellous!” one viewer laughed.

“Bradley should be a contestant on Celebrity #TheChase,” another said.