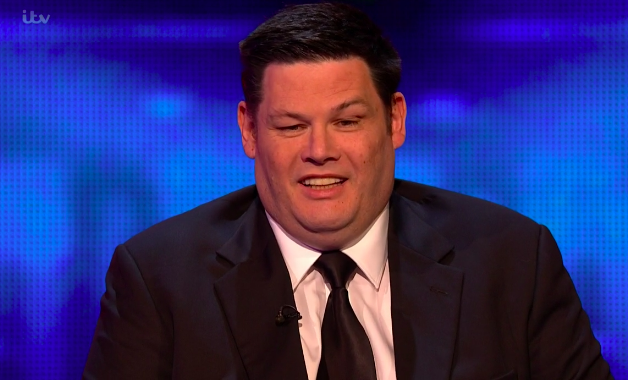 The Chase’s Beast and a funeral director fight to the death!

The competition was, er, stiff

Thursday’s edition of The Chase was a fast-paced, exciting affair. For once, it seemed like at least some of the contestants would leave with a substantial jackpot. But unfortunately, right at the last minute, it wasn’t to be.

One of the duo in the final round was Kerry, a funeral director from Sutton Coldfield. Surprisingly, her unusual job was the cue for plenty of laughs, both on the show and on social media.

Kerry told host Bradley Walsh that she’d met her future husband, also an undertaker, in a mortuary on Valentine’s Day. How romantic!

He worked for a rival funeral parlour. He’d wooed Kerry with flowers – hopefully not left over from any of the services!

Kerry cheekily told Brad: “If you need any help in the future I’ll do you a deal!”

Viewers were quick to join in with the puns. One said on Twitter: “I wonder what makes you wake up one morning and say to your hub, ‘Let’s be funeral directors darling’.”

Another tweeted: “Funeral director… to be fair it’s a dying trade.”

A third joked: “You would have thought Countdown would be the theme tune to hear at a funeral.” 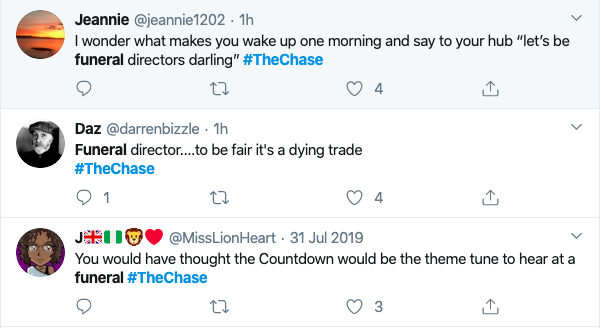 Back to the ITV quiz, where adrenaline junkie Kerry’s dream was to win enough money to go on holiday to Florida and ride the rollercoasters.

When The Beast, Mark Labbett, appeared as The Chaser, he quipped: “When I pass, the gravedigger will be on triple overtime with me! He’ll need a JCB!”

The only thing buried tonight are the team’s chances.

He added: “The only thing buried tonight are the team’s chances.”

Kerry beat the Beast on a question about avocados.  She managed to raise a whopping £24,000 and was welcomed back to her team mates Rory, Paul and Amy, with open arms.

As one fan on Twitter pointed out: “Haven’t seen anyone win for absolute donkeys.” Perhaps tonight would be the night, if nobody made a grave mistake?

But sadly, after Paul and Rory’s go at the board, the competition was too stiff, and they went home with nothing.

Now it was the turn of Amy, the manager of a branch of Taco Bell from Doncaster. Mark warned her: “The only way you’re making money off me is if I visit your restaurant.” Harry Potter nerd Amy was prevented by Mark from winning big money. But she took back a respectable £6,000 for her and Kerry.

By the end of the show, Mark had proved too much for the women, who struggled to keep up a run of correct answers.

One angry fan tweeted: “That was shocking, you deserved the loss ladies.”

Harsh! But it does mean that, once again, The Beast made a er, killing.

Who’s your favourite Chaser? Head to our Facebook page @EntertainmentDailyFix and let us know.