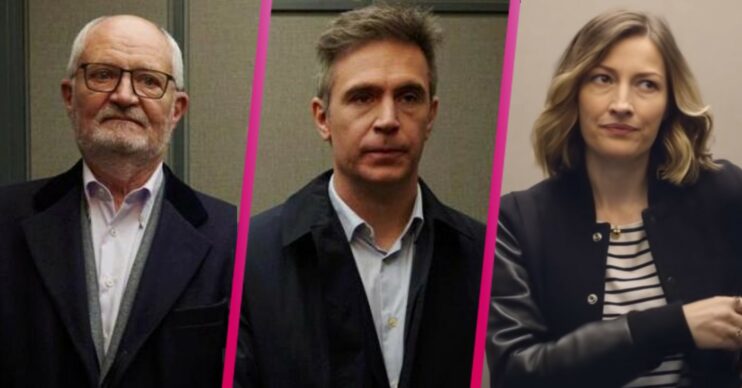 Ten Percent on Amazon Prime Video: Is it the same as Call My Agent? Who makes a cameo?

Ten Percent is the long awaited UK remake of the popular French Netflix comedy Call My Agent! and the Amazon Prime Video series has a cast to get seriously excited about.

It’s funny, star-studded and sees celebs sending themselves up – what’s not to love?

Each episode is a beautifully-wrapped present of 30 minutes and can be binged in one night!

Here’s everything you need to know about the upcoming Amazon Prime Video series Ten Percent.

Read more: Call My Agent! celeb cameos: All the guest stars in the French comedy-drama series

What is Ten Percent on Amazon about?

Ten Percent pokes fun at the exasperating world of film/TV agents, and the horrors of dealing with huge stars and their egos.

Of course, entertainment agents manage some of the most famous people on earth.

And the first rule of being an agent is to keep the client happy – no matter what they are demanding.

And therein lies the absurdity and the humour.

Imagine Will Smith’s agent the night of the Academy Awards, for example…

In Ten Percent, we meet the harassed staff of Nightingale Hart, a small London talent agency set up in the 1980s but now struggling financially.

Each episode welcomes some pretty amazing cameo appearances from the likes of Line of Duty star Kelly Macdonald, to Bridgerton‘s Phoebe Dynevor.

The title refers to the Ten Percent that agents get from representing their client.

The French hit Call My Agent! has been given a “substantial cosmetic procedure to be remade from a British perspective”.

Read more: Call My Agent! One of the best shows you need to watch on Netflix!

Is Ten Percent the same as Call My Agent?

Ten Percent is based on the original series Call My Agent!

He’s the man behind W1A.

The series will follow the French model, but will be set in London and feature uniquely British problems like class wars.

Ten Percent Amazon cast: How many episodes is it?

Ten Percent will be eight episodes in total.

Each episode will be less than 30 minutes long.

Like Schitt’s Creek and Ted Lasso, the comedy series will be perfectly binge-able in bite-sized portions.

Get the snacks in and play cameo bingo!

How can I watch Ten Percent online?

The series will launch on April 28, with all eight episodes available exclusively that day on Prime Video in the UK.

That’s four hours of comedy and celeb-spotting right there!

When does Ten Percent start?

The entire series will be available to watch from that date.

There’s no word on a series 2 yet.

Who is in the regular cast of Ten Percent on Amazon?

The AWESOME Jim Broadbent stars as Richard Nightingale, the founder of Nightingale Hart.

Veteran actor Jim Broadbent is famous for his roles in film and TV, including Kempton Bunton in The Duke, Lord Thomas Badgley in Dolittle, and Mr Gruber in Paddington 2.

Ten Percent cast – who appears as a celebrity cameo?

Of course, she plays herself as all the big hitters do in the series.

Emma Corrin, Alex Jones, and Lorraine Kelly also pop up as themselves!

David Oyelowo plays himself, as does his real life wife Jessica Oyelowo, who is also an actress.

Ten Percent reviews – what are the critics saying?

Critics are lukewarm about Ten Percent so far.

Culture Whisper’s Euan Franklin says: “Despite feeling like a cross between a remake and a rewatch (both inferior), Ten Percent retains the whip-smart enjoyment of its source material.

“The uniquely London atmosphere, rushing through Soho and Leicester Square and High Holburn, provides something fresh at least.”

He does advise viewers to watch Call My Agent! instead, though.

The Independent’s Nick Hilton adds: “The British cameos, including Helena Bonham Carter and Dominic West, are broad enough to make this reimagining of the French hit worthwhile.”

However, she warns “it’s just not very funny”.

The Metro says the remake “brings more tears than laughs”, while the Evening Standard calls it “bumbling and stuffy”.

Ten Percent Amazon cast: How can I watch Call My Agent!?

If you want to watch Call My Agent! instead as some critics suggest, it’s still possible to do so.

Four seasons of Call My Agent! are currently available to watch on Netflix at the moment.

Originally, the producers of Call My Agent! intended the fourth season to be the last.

But in April 2021, it was confirmed that there would be a feature-length episode to come, followed by a fifth season.

Will you be tuning in to see Ten Percent on Amazon Prime Video? Leave us a comment on our Facebook page @EntertainmentDailyFix.