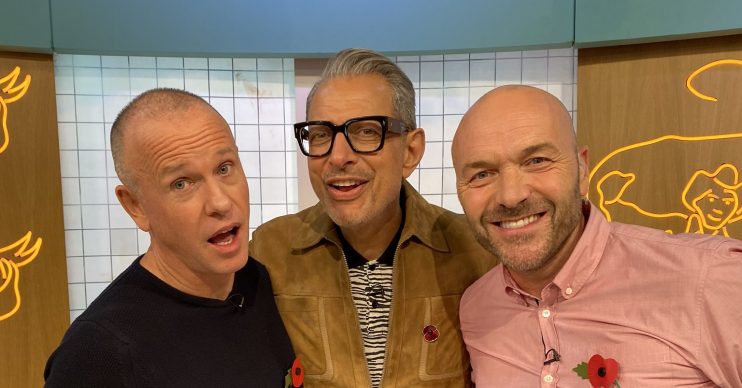 The Hollywood actor, 67, eventually joined guests Clarke Peters, James Blunt and Liz Bonnin as well as presenters Tim Lovejoy and Simon Rimmer, but at one point it looked like he wasn’t going to turn up at all.

As fans waited patiently at home, the Channel 4 show tweeted: “Jeff Goldblum is here! Just made it in time before the end of the break.”

Jeff Goldblum is here! Just made it in time before the end of the break 😁 #SundayBrunch pic.twitter.com/Zh692stZfs

“About time,” one viewer replied.

Before his arrival, a Sunday Brunch fan wrote on Twitter: “Is Jeff going to turn up? If so he better have a good excuse! I think it’s just rude now!”

While another joked: “Jeff Goldblum is late for Sunday Brunch because he got in the wrong taxi and didn’t realise there was a fly in it.”

Read more: Gary Lineker ‘confirms’ Ian Wright is going on I’m A Celebrity…Get Me Out Of Here!

Is Jeff going to turned up? If so he better have a good excuse! I think it’s just rude now!! 😣 #SundayBrunch

Jeff Goldblum watching the start of the show on his phone and tells the driver to drive around the block 5 more times….. pic.twitter.com/2kVRZoKyv9

However, when he did eventually turn up, his appearance went down a storm with viewers, with one calling it the “TV highlight” of the year.

Though he admitted he wasn’t a great cook, he did treat viewers to an impromptu music performance as he played jazz on a keyboard.

“Jeff is just brilliant! Wonderfully eccentric,” another viewer tweeted, and someone else shared, “Jeff goldblum what a man he’s really on Sunday Brunch just vibing.”

Jeff goldblum is on Sunday brunch this is amazing

Sunday Brunch viewers were also treated to music from James Blunt, who performed single Cold from his sixth studio album.