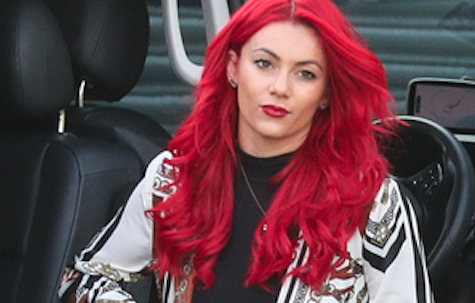 She's given an update about whether she'll perform tonight

Dianne Buswell will take part in Strictly Come Dancing this weekend – despite reports she was rushed to A&E after falling on her head during rehearsals.

The Aussie ballroom dancer is believed to have been hospitalised after falling eight foot from above celeb partner Dev Griffin’s shoulders as he tried to rotate her.

However, despite being said to have been diagnosed with whiplash following the worrying accident, the 30-year-old has insisted she will take to the dance floor tonight.

Addressing her 130,000 Twitter followers this morning, Dianne thanked fans for their well wishes – and stressed her celebrity partner was not at fault.

“Thank you for all the lovely messages of concern,” she tweeted.

“We had an accident, key word being accident, it was not Dev’s fault at all, these things happen.

“But great news is I’m fine and we both can not wait to dance tonight.”

And on Instagram last night Dianne indicated Dev continued to train hard, even though she was not on hand to direct him.

Sharing a video showing him rehearsing alone, she captioned the clip: “He does not stop even if I’m not there.”

According to The Sun, radio DJ Dev “couldn’t help but panic” and “looked in total shock” as he accompanied Dianne to hospital in north London.

An unnamed source is reported to have told the tabloid: “It was horrible to watch Dianne lying prostrate on the floor. Dev was desperate at what had happened.

“He was praying that there was no serious damage – the worst case scenario was that she had some internal head injuries.”

Relieved fans admitted they had been anxious about the popular dancer’s condition until she reassured them on social media.

“So glad to hear you’re alright, can’t wait to see you smash it tonight,” reacted one follower.

“Glad you are okay Dianne. When I saw the news about it I cried,” said another.

A third added: “Was so worried but so happy you’re alright, good luck tonight.”

Dianne and Dev are scheduled to be dancing to Friend Like Me from the Aladdin soundtrack for their Movie Week performance this evening.

– Week 3 of Strictly Come Dancing airs tonight on BBC One at 7.10pm