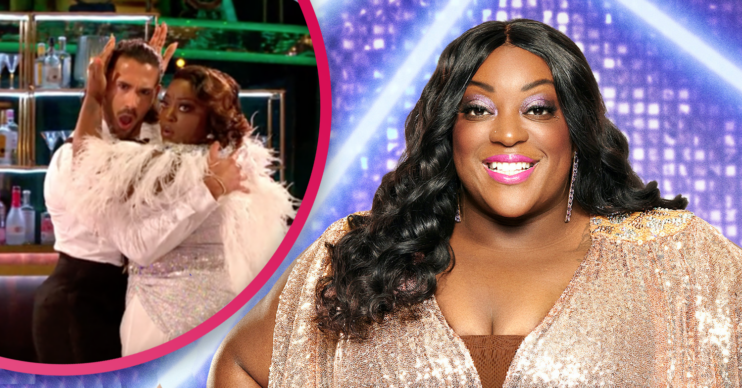 Of course she was, Graziano's a hottie!

Strictly star Judi Love has joked that she was “ready” for the curse to strike on the BBC dance show.

Opening up to Jonathan Ross on his chat show tomorrow night (December 4), Judi revealed being a part of the show was “unbelievable”.

Asked about her favourite moment, she said: “You can’t tell? It was twerking my [bleep] on BBC!”

However, it seems there was another highlight for Judi, who was paired with Graziano Di Prima.

What did Judi say about her time on BBC dance show Strictly?

She told Jonathan of the experience: “It was unbelievable. Just being glammed up every week and working with someone who is so passionate about what they do…

“I didn’t get a bad choice did I?” she said, speaking about Graziano. “I was dribbling.”

Judi was also asked about the show’s curse, and seemed pretty disappointed that she didn’t get to experience it first hand.

“I was ready – I was reaaaddyyy… I was banking on it!” she chuckled.

She added to Jonathan: “It’s not until you’re in it that you realise how intimate you are with your partner.”

Judi on the Strictly curse

However, she said that it’s not the celebrities and their pros that you need to watch when it comes to the Strictly curse.

Oh no, Judi said there are others on the show who are way closer… literally.

Read more: Rose and Giovanni drop Strictly bombshell as they admit to mistake

The Loose Women favourite joked it’s Vicky Gill’ costume department who should be discussed when it comes to the curse.

“I was so intimate with them!” she quipped.

What happened during Judi’s time on Strictly?

Judi made history as she became the show’s first contestant to twerk on the BBC dance show.

She also shed a load of weight and said the show made her a lot more aware of looking after her health.

Judi and Graziano were eventually eliminated in week six of the series.

Their elimination came after Judi took a week off to battle COVID-19.