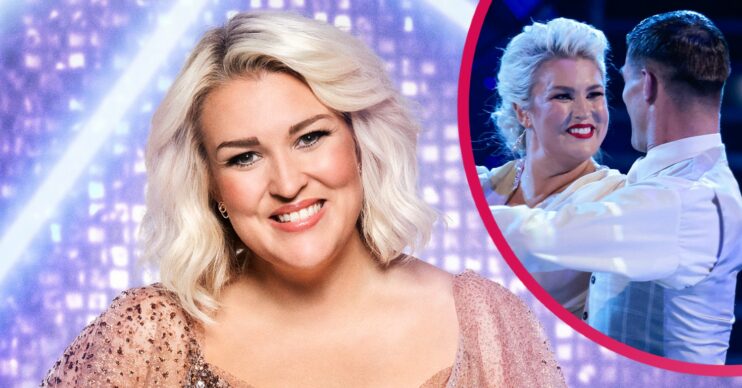 The Dragons’ Den star and her professional partner, Aljaz Skorjanec, bagged an impressive 34 points for their foxtrot last week.

However, some viewers are concerned with Sara‘s movie week routine.

For the show’s movie week, 37-year-old Sara will perform the samba dressed as Princess Fiona from the Shrek films.

Meanwhile, Aljaz will be dressed as Shrek.

They’ll dance the routine to the song, Best Years of Our Lives, from the movie soundtrack.

Read more: Strictly star Aljaz Skorjanec hits back after being taunted about ‘chances of winning’

Speaking to Teeside Live, Sara admitted that she couldn’t be more excited to take on the ogre.

Sitting alongside Aljaz, 31, she said: “I’m feeling good about this week because it’s so much fun.

“We’re doing the samba and he’s picked Shrek as the movie. The kids love all the Shrek movies!”

She continued: “It feels so much fun and I get to be Princess Fiona. He’s got to dress up in a big bodysuit as Shrek.”

But while Sara seemed happy with the theme, some viewers appeared far from impressed.

They gave their verdicts after Strictly announced the songs and dances for this weekend’s show.

On Twitter, one said: “Why would they make Sara do a samba to Shrek, they did her dirty! But I really hope Rose does well with that foxtrot and nice to see Tom & Amy back dancing!”

Another added: “Most worried for Sara and Ugo this week :(.”

A third joked: “Which contestant you calling Shrek? #strictly.”

Why would they make Sara do s Samba to Shrek, they did her dirty 😭 But I really hope Rose does well with that Foxtrot and nice to see Tom & Amy back dancing!

Meanwhile, one viewer listed a number of concerns with the week three routines.

One of them included: “Sara Davies dancing to Shrek… why?”

However, others admitted they couldn’t wait to see the performance.

They did her dirty!

One wrote: “Shrek and Fiona doing the samba = things we didn’t know we needed. Buzzing!”

A second said: “These people are so damn smart. Sara 100% gives off fairy godmother vibes (in a good way) and Rose being Rose from the Titanic was lowkey obvious, but I didn’t think of that.”

On Instagram, another stated: “I’m excited to see Aljaz and Sara as Shrek and Fiona lol.”