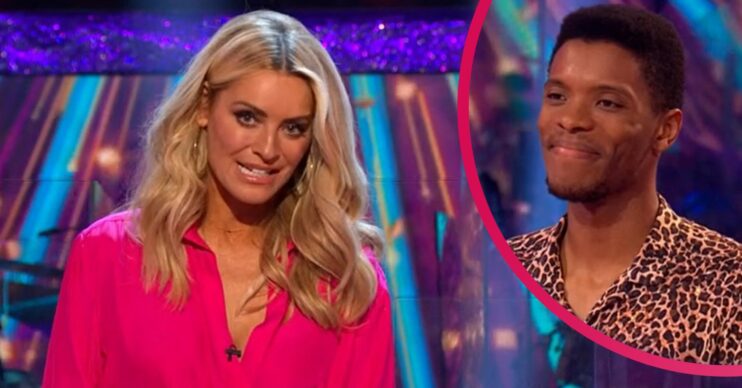 But host Tess Daly came under fire from viewers for her comments to Rhys as he faced the dance-off against John Whaite.

What happened on Strictly last night?

As it was announced that Rhys would be facing the dreaded dance-off, Tess told him: “Aw I’m so sorry darling.

Read more: Strictly: Rhys Stephenson misses out on spot in final as he’s voted off

“I know this is not the position you wanted to find yourselves in.”

Rhys replied: “Yeah but it’s different. I think that was the most incredible semi-final in Strictly history.

“And I think to be in the bottom two amongst that calibre is a privilege to be honest.

“I get the chance to dance a really amazing dance and feel that energy again. It’s a gift.”

But viewers were annoyed by Tess’ tone and accused her of speaking to Rhys ‘like a child’.

One person said on Twitter: “Rhys is 28 years old. Why does Tess speak to him as if he’s about 14? I like Tess but really, patronising much?”

Another wrote: “Wish Tess wasn’t so patronising to Rhys! She talks to him like he’s five years old!”

A fourth tweeted: “Tess really does make me cringe when she talks to Rhys like a bloody baby!!”

Meanwhile, Rhys and partner Nancy Xu were later voted off the show after the judges saved John and his professional partner Johannes Radebe in the dance-off.

What did Rhys Stephenson say?

Alongside a couple of photos of them dancing on Saturday night, Rhys said: “‘Don’t cry because it’s over, smile because it happened’ firstly, thanks to @tomfletcher for that Dr Seuss quote.

“Secondly thank you all for sticking with Nancy and me throughout this whole journey, it wasn’t easy but the best things rarely are.”

He continued: “So many people would give so much just to be on this dance floor so to have done it for 12 weeks is already a win.

“I’m a little lost and sad right now but to cry and feel is great thing because it means you’re healing.”

Rhys concluded his emotional message: “I will carry the memories of this experience and my time with Nancy with me for the rest of my life.

“But on a brighter note, I can’t wait to tune in to the most diverse Strictly final there has ever been, get in 2021!”