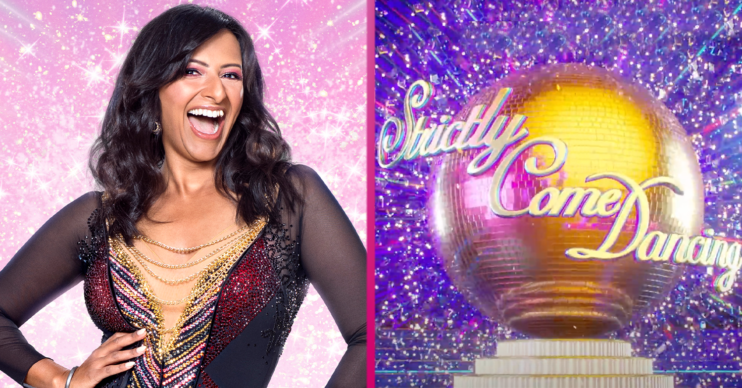 Strictly 2020 star Ranvir Singh has admitted that she thinks her “poor” professional partner may have quite the job on their hands teaching her to dance.

Opening up to Entertainment Daily and other news outlets to launch the series, Ranvir revealed that, when she dances, she tends to keep her feet “still”.

Ranvir said she came to the realisation when asked by producers to perform her “signature dance move”.

She said: “I think my signature dance move might be a little shuffle thing. I tend to keep my feet really still and do all this shimmying with my shoulders, which is the opposite of what you need for Strictly.”

Ranvir added: “I think my poor partner is going to have a job on their hands.”

The Good Morning Britain host also thinks the Strictly Come Dancing wardrobe team will have their work cut out after she admitted gaining a stone in weight during lockdown.

Self-deprecating as ever, she said: “I put on a stone during lockdown so the poor wardrobe people.”

And Ranvir admitted that, when it comes to being Strictly-fied, she has just one request.

“I said: ‘Listen, I don’t care what you do on the outside, what I care about is the strength of the support underwear. It has to be the best you’ve got, just suck it all in. I’ll have fat earlobes, fat fingers and fat ankles because you’ve pushed it all out and that’s fine, I’m happy with that.'”

When it comes to sequins and glitter, Ranvir isn’t going to be shy about embracing everything that’s thrown at her.

“I love it all. I want it all. When else do you ever get a chance to do all this? There’s no point being shy about anything really, you’ve just got to go with it,” she said.

Advice from her GMB pals

The breakfast TV host has started taking multivitamins and she’s started running to get her body “used to being completely out of breath”.

She’s also been taking tips from her GMB co-hosts who’ve taken part in the BBC dance show before.

Susanna Reid, Charlotte Hawkins, Kate Garraway and Richard Arnold have all appeared on Strictly before.

“The only thing Susanna keeps saying to me is: ‘Ranvir, you have no idea what is about to happen.’ She’s just like: ‘You’ve got no idea, it’s a whirlwind.’

“Everyone keeps saying you’re in the centre of a complete whirlwind and it’ll be like nothing else you’ve ever done, the all-consuming nature of it.

“But everyone has really loved it and they all say it’s going to be the best thing you’ve ever done in your life and to just enjoy every second.”

Speaking about where she’ll find the energy, Ranvir said: “I did ask Susanna and everyone else, because they worked on breakfast television while doing Strictly.

The only thing Susanna keeps saying to me is: ‘Ranvir, you have no idea what is about to happen.’ She’s just like: ‘You’ve got no idea, it’s a whirlwind.’

“They just said your adrenalin will carry you through, but you will be completely shattered by the end of it!”

How will Ranvir feel about facing the judges?

And, when it comes to the judges, Ranvir has already picked her favourite.

When it comes to impressing them, Ranvir said she’s aiming for a “beautiful top line”.

“You know they say keep your shoulders down, have your head back, so as long as I’m getting some things right, the judges, at least in the early days, will be responsive,” she said.

She added: “I think when you’re in the show, Craig’s opinion bites because he is judging you and therefore what he says really matters.

“But I am quite good at taking feedback. And quite often you are your own greatest critic. You always know when something’s gone well and when something hasn’t.

“I’m hoping I’ll be able to take in some of the feedback but I’m sure it will burn and sting a little bit. I’m going to try and find a face that goes ‘okay’, so that I don’t cry or something.

“I think when the tiredness kicks in, that’s what I’m worried about. Depending on how long you’re in it, doing a full-time job, doing GMB, all around Britain and then all the training for Strictly. I think the stamina and tiredness might be the thing that is the biggest thing to deal with for me,” Ranvir admitted.

She doesn’t have the right ‘attitude’ to win

When it comes to her competition, though, Ranvir thinks they’re all “lovely” and just wants everyone else to win.

“It’s so lovely,”  she said. “I just want everyone else to win. I’m like: ‘HRVY’s so nice, it’ll be so nice if he won.’ My manager is like: ‘You do realise that’s not the right attitude.’

“But I feel like a viewer, I want everyone else to win. My niece is a massive fan of Jamie Laing and I’m having to persuade her to vote for me,” she added.

So what’s Ranvir most looking forward to when it comes to hitting the Strictly dance floor?

“Personal confidence came later on in life for me,” she said. “I’m 43 now and I just feel like I’m more relaxed about being me and people seeing me more.