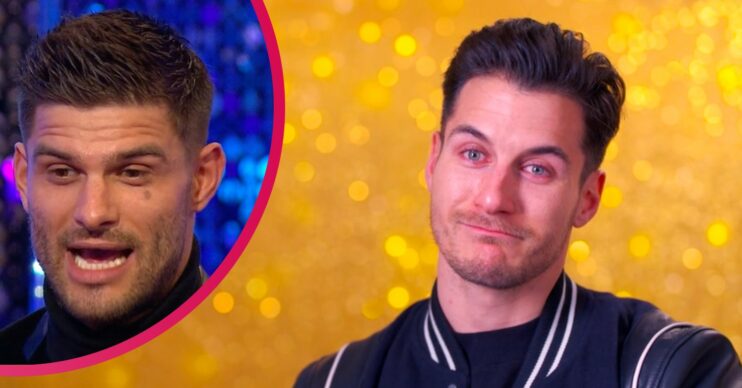 Strictly Come Dancing pro Gorka Marquez was left “fuming” after he almost missed the show’s tour thanks to his co-stars.

The Spanish dancer was watching the tour in Manchester when his fellow BBC One stars pranked him.

Gorka took his partner, Gemma Atkinson, and their daughter to see the Strictly tour in Manchester yesterday (January 30).

However, the 31-year-old Spanish dancer almost missed half of the show due to a prank played by his co-stars!

Aljaž Škorjanec took to Instagram to explain what they had done to their fellow pro dancer.

The star posted a picture of the crowd in the Manchester Arena. He then drew an arrow above where Gorka was sitting.

“One of the cheekiest things we have ever done,” he captioned the post.

“Telling 9000 people in the Manchester arena to please go and get a photo and a signed programme from @gorka_marquez.”

He then apologised to Gorka, before congratulating his fellow co-conspirators, Kai Widdrington and Giovanni Pernice, on a job well done.

He then revealed it had taken Gorka 45 minutes to sign people’s programmes!

How did Gorka react?

“I only missed half of the second half!” he wrote. “Payback pending @aljazskorjanec @giovannipernice @kaiwidd.”

However, Gemma revealed that he was actually “fuming”!

“Fuming that his food was cold by the time he sat to ate it,” she commented.

Other Strictly stars, and fans, saw the funny side of Aljaž, Giovanni, and Kai’s prank. Rose Ayling-Ellis commented with lots of laughing emojis, as did Nancy Xu.

“That was so funny! I’m sure @gorka_marquez will be getting his own back soon,” one fan wrote.

“Well done @gorka_marquez you were so good about it! Loved the prank!” another commented.

“Loved the show!! So glad I managed to get a picture with @gorka_marquez. Thank you guys,” a third said.

What else has happened on the Strictly tour?

The Strictly tour has hardly been out of the news since it launched on January 20!

Nikita Kuzmin was forced to miss the first few days of the tour thanks to COVID, meaning his series partner, Tilly Ramsay, had to find a new dance partner.

Pro dancer Amy Dowden has also been forced to temporarily drop out of the tour due to illness.

The Welsh dancer suffers from Crohn’s disease and experienced another flare-up over the weekend.

Perhaps the biggest story to come out of the Strictly tour, however, is the reported burgeoning romance between Kai and fellow pro dancer Nadiya Bychkova.

The pair were spotted sharing a kiss in a hotel bar in Newcastle last week.

They have reportedly grown close after Nadiya split from her footballer fiancé.