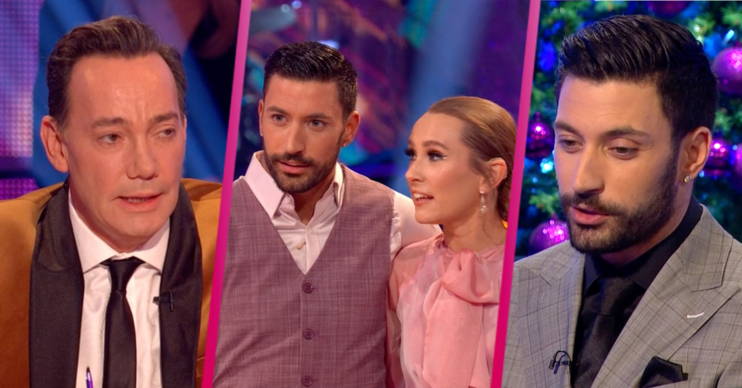 Did you spot the 'sticky' foot?

Strictly Come Dancing hunk Giovanni Pernice has refused to comment on judge Craig Revel Horwood‘s comments about a “mistake” he and partner Rose Ayling-Ellis made on the live show last weekend (December 11).

And, before looking ahead to the final on Saturday (December 18), they looked back at their Waltz and Argentine Tango last weekend.

What did Giovanni Pernice NOT say on It Takes Two?

Janette asked the couple: “You almost got a full house. For the Waltz you got a 39. Craig mentioned something about a slippery foot. What was he talking about?”

Read more: Strictly fans all have the same complaint about Janette Manrara’s appearance on It Takes Two

Giovanni seemed a little reluctant to comment and told Janette: “Errrr something on the floor maybe that would stick on it?

Janette then pressed for a reply to Craig’s criticism.

Giovanni told her: “I don’t want to say anything but it’s there, it was there, he saw it.”

What did Craig actually say on Saturday night?

After their Waltz, Craig offered his critique.

“There was one tiny small hesitant sticky right foot, it was right in front of me,” he said.

Read more: Rose and Giovanni hit back after complaints about their Couple’s Choice dance

“That’s the only thing, a little sticky moment with your right foot darling.”

“Okay,” a perplexed Giovanni said, before Craig attempted to claw it back.

“But that was probably one of the most amazing waltzes I have seen on this show.”

Rose and Giovanni to correct ‘mistakes’ in the final

Elsewhere on the Strictly spin-off Giovanni and Rose addressed the judges’ choice of dance for the final this weekend.

They’ll be dancing their Frozen-inspired Quickstep, which also had a tiny mistake.

Giovanni explained: “There was a mistake there wasn’t it. A small mistake over there.

The Strictly final is on Saturday (December 18) at 7pm on BBC One.

Head to our Facebook page @EntrtainmentDailyFix and tell us who you want to win.