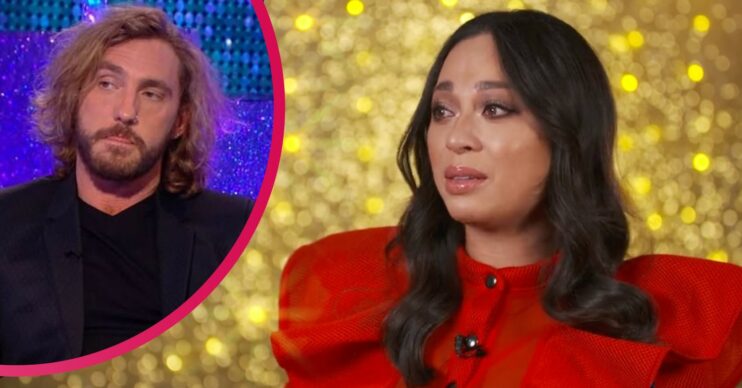 During the interview, Katya spoke about her time dancing with comedian Seann Walsh, and many branded the moment as “awkward”.

Why was Katya on Strictly: It Takes Two?

Pro dancer, Katya Jones, 32, appeared on Strictly: It Takes Two last night to talk about her time on the show so far.

The Russian dancer was paired with Olympic swimmer Adam Peaty on this series, with the pair finishing in ninth place.

During the pre-recorded interview, Katya spoke about her first partner on the show, ex-politician and sometime-GMB host, Ed Balls.

The pro dancer got emotional and broke down in tears at one point as she recalled her and Ed’s exit from the show in 2016. The star spoke about how Ed is her “father figure in England” and a “friend for life”.

Katya also spoke about her other partners on the show too during the interview.

What did Katya say about her partnership with Seann Walsh?

However, it wasn’t her discussion of those partnerships that had Strictly: It Takes Two fans wincing with awkwardness.

It was the part where she talked about being paired up with Seann Walsh in 2018.

In October 2018, videos and photos of Katya and Seann kissing were published.

Seann had a girlfriend at the time, whilst Katya was married to fellow pro-dancer Neil Jones. The scandal led to the end of both their respective relationships.

During the interview, Katya spoke about her partnership with Seann. The couple finished in 11th place in that series.

However, despite their early exit from the show, Katya still spoke highly of her time dancing with the comedian.

“In 2018 I was paired up with comedian Seann Walsh and this is when Matrix routine came to life,” she said.

In Week 3, Movie week, Seann and Katya performed a Paso Doble to Clubbed to Death from the Matrix movie.

“This is the routine I’m most proud of,” she revealed.

What did Strictly: It Takes Two viewers say?

Despite the section of the interview about Seann being very brief, many viewers still found it to be “awkward” to watch.

“I like how you could feel all the oxygen leave the room Katya was in when she recorded that section, it was good. Not at all awkward,” one viewer sarcastically wrote on Twitter.

“Let’s just casually gloss over everything else about Seann,” another viewer winced.

Another Strictly: It Takes Two fan said that they’d watched the Seann section of Katya’s interview with “morbid fascination”.

But not everyone found that section of the interview to be awkward.

“I’m glad that Katya was happy to talk about her time with Seann Walsh. Controversy aside, that Matrix routine is one of my favourite Strictly routines ever. Definitely in my top 10,” one viewer said.

The Strictly Come Dancing final is on BBC One and BBC iPlayer at 7 pm on Saturday, December 18.

Did you think Katya’s interview was awkward? Leave us a comment on our Facebook page @EntertainmentDailyFix and let us know what you think.