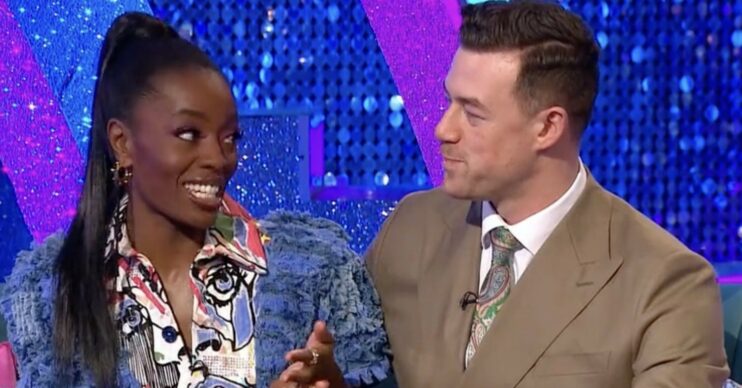 BBC viewers are convinced more is going on

AJ Odudu has broken her silence over claims that she is dating Strictly dancer Kai Widdrington.

The TV presenter, 33, has made it through to the show’s final this weekend.

AJ has confessed that she’s enjoying showing off her more vulnerable side to viewers through her dancing.

She says that the experience has been “life-changing” for her over the last few weeks.

“I do definitely feel empowered by the show, I’m completely liberated,” she said.

“There are so many little things as well in television that I think subconsciously I’ve not even realised about myself, even the confidence to go on TV in front of millions of people without a face of make-up on, that’s been quite a thing.

“Showing different sides of my personality, being my complete, unapologetic self, has been quite liberating because, I guess, it’s not something that I do naturally, like go on TV and cry, I’m always usually bubbly and bouncy.”

Meanwhile, the question on everyone’s lips is whether AJ and Kai have struck up a romance.

Following much speculation, AJ has revealed that the pair are getting on “really well”.

However, she made sure to keep her response cryptic which will no doubt keep viewers at home guessing.

She teased to Metro: “I think this goes to show how we are clearly getting on really well.

“But, obviously, we just really want everyone to focus on what we’re doing on the dance floor.”

Meanwhile, theirs is not the only Strictly ‘romance’ being obsessed over.

On Sunday night’s results show, viewers were shocked when they saw Giovanni kiss Rose and it’s only made some more convinced of their love for each other.

Meanwhile, leave us a comment on our Facebook page @EntertainmentDailyFix and let us know what you think.