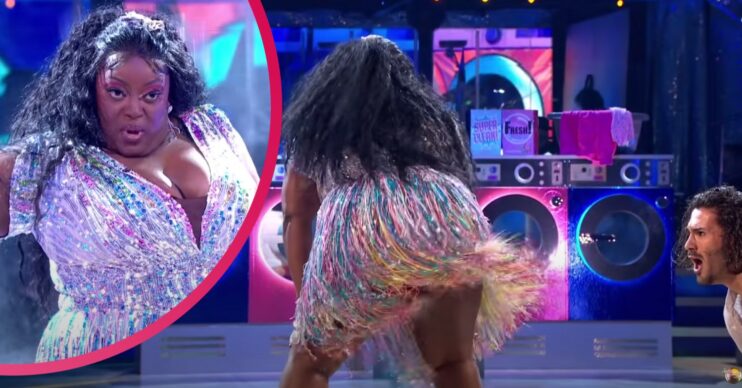 So many loved it, but others complained about 'judging inconsistencies'

Viewers of Strictly Come Dancing were blown away by the high-energy performance put in by Judi Love and Graziano Di Prima on Saturday.

But going by some reactions on social media it seems not everyone was convinced by her twerking.

Loose Women star Judi and her dance pro partner pulled out a spectacular Samba that had judges and fellow contestants alike raving over her vibrant efforts.

However, some critics claimed her technique was lacking – and even suggested the judges were ‘inconsistent’ with their appraisal.

The judges gave Judi and Graziano a score of 25 (6,7,6,6) for their dance to Get Busy by Sean Paul, meaning they were safe from elimination in week two.

And former Strictly star Kevin Clifton also loved what he saw, writing: “Dance of the night.”

But among the deluge of congratulations and social media messages highlighting how much they enjoyed watching Judi and Graziano, not everyone was happy.

One person grumbled on a post made by the Strictly account today (Monday October 4): “Not for me. Walking and twerking does not add up to dancing.”

Walking and twerking does not add up to dancing.

Over on YouTube, someone else echoed that comment: “A bump ‘n’ grind Samba. This dance was rough and not good to look at! I could have well done without the twerking also!”

And yet another person moaned: “Hated this and this is not the right dance for her. Also I found her arms wonky and not straight as Graziano’s and she had no bounce so I didn’t enjoy this. Plus why did she twerk?”

Others felt Judi was evaluated less harshly than other contestants.

One commenter claimed: “I wish the judges would use the same criteria when judging otherwise it’s blatantly unfair. Whilst she was entertaining I think she was over-marked.”

“The inconsistency of judging is really irritating” wrote another.

“If you watch the footwork in this dance, it is terrible. I didn’t enjoy it at all.”

Judi Love thanks her fans

Nonetheless, Judi and Graziano sailed through to week 3, with Nina Wadia and Neil Jones being eliminated.

Although Judi rightly remains positive and did not address negative reactions, she also indicated there won’t be any more in the immediate future.

She told fans on her Instagram Stories yesterday evening (Sunday October 3): “That’s right, we’re back next week. But no, we’re not twerking next week.

Strictly Come Dancing airs next Saturday October 9 on BBC One from 6.45pm.