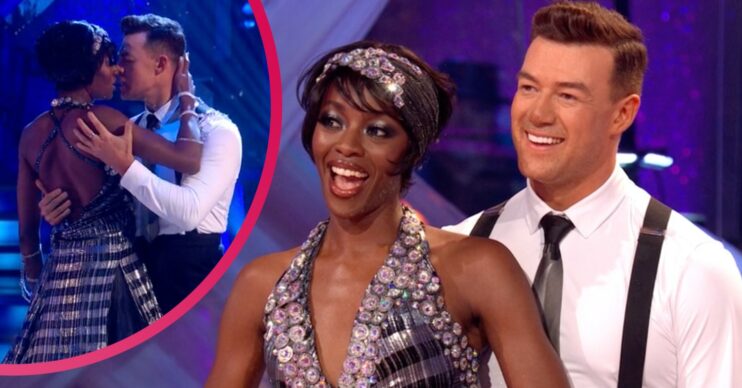 They're both reportedly single...

Strictly stars AJ Odudu and Kai Widdrington are being linked romantically by a tabloid report.

The Sun claims TV presenter AJ is “falling” for her hunky dance pro, 26, according to her friends.

The tabloid also claims that members of the Strictly cast and crew are ‘betting’ on the pair getting together.

ED! has contacted representatives for AJ and Kai for comment on The Sun’s story.

An insider is reported to have insisted to the newspaper that ‘romance is on the cards’ for AJ and Kai.

They said: “Everyone backstage is talking about the sparks flying between AJ and Kai. It’s very passionate and intense whenever they’re together.

“They’re both single and have really hit it off and everyone on the show is saying it’s only a matter of time.

“They’re always laughing and flirting – romance is 100 per cent on the cards.”

The unnamed source also indicates that Kai is AJ’s “type”.

And that’s because he reportedly has “loads of banter” and is also impressed by her.

The insider goes on to suggest AJ has previously been very focused on her telly work.

But now, it is claimed, her professional and personal lives could align.

We need to work on our romantic spark. But I’m sure it’ll come.

During yesterday evening’s (Saturday October 9) VT, AJ said the pair had been working on their acting.

They have been training together for up to ten hours a day – but she admitted aspects of their performance needed work.

AJ laughed: “We need to work on our romantic spark. But I’m sure it’ll come.”

They scored 35 for their American Smooth to I Have Nothing from The Bodyguard.

According to reports, AJ is not believed to be dating anyone.

Kai is also thought to be unattached. Johannes Radebe recently indicated on Instagram that Kai isn’t married or in a relationship.

And Giulia’s agent told the Mirror in July that the pair remain on good terms.