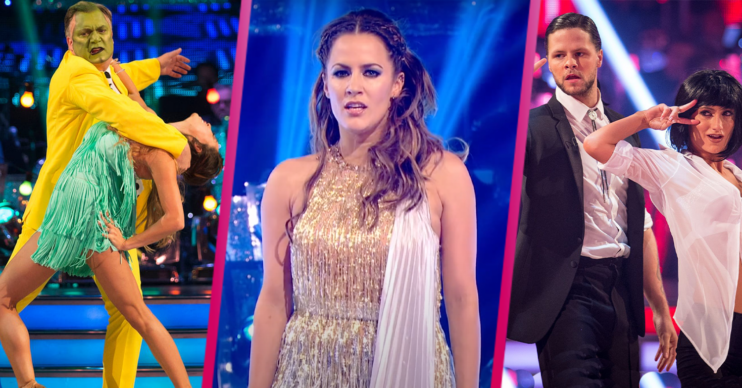 This year's contestants have a lot to live up to

Strictly Come Dancing goes to the movies this week, with Hollywood coming to the BBC ballroom for one of our favourite episodes of the season – Movie Week.

However, this year’s stars certainly have a lot to live up to when you take a look back at Movie Week dances from years gone by.

There are so many corkers, we’ve struggled to make our list.

Read on for our top picks of all the Strictly Movie Week dances that ever there was and see if your favourite is in the mix.

Surely one of the most epic dances in Strictly history was Jay McGuiness and Aliona Vilani’s jive back in 2015.

They danced to Misirlou/You Never Can Tell from Pulp Fiction.

And, not only did they look the part, they scored pretty highly with the judges too.

They were given 37 points out of 40 – the highest week 3 score in the history of the competition up until then.

Ore Oduba, who went on to win the 2016 series, channeled his inner Gene Kelly for his Movie Week routine.

He and partner Joanne Clifton performed an American smooth to Singing’ in the Rain from the film of the same name.

The audience, viewers at home and judges loved it – with the dance scoring 35 out of 40 points.

Alexandra Burke and Gorka Marquez pulled off one of the dances of the 2017 season on Movie Week.

Channeling Mary Poppins and Burt, they danced the Charleston to Supercalifragilistic from Mary Poppins.

And it was a delight, with the judges giving her 39 out of 40 points.

However, as much as we loved it, the audience at home didn’t seem to, with Alex fighting for her place in the Movie Week dance off.

Frankie Bridge and Kevin Clifton danced the paso doble to America from West Side Story in Movie Week 2014.

Donny Osmond was guest judge that week, so the scores were awarded out of 50.

Frankie secured a whopping 45 and a place in our Movie Week hall of fame.

Caroline Flack was nothing less than spectacular when she performed a sultry rumba to Don’t Want to Miss a Thing from Armageddon on Movie Week in 2014.

Donny Osmond was on the panel and this meant that she was being scored out of 50.

How she only got 42 points is beyond us – it’s one of our favourite Strictly dances ever!

Kellie and Kevin win the award for best costume

And the award for best costume goes to EastEnders star Kellie Bright.

She performed a Charleston for Movie Week in 2015 with partner Kevin Clifton.

They danced to the theme from Star Wars, with Kellie dressed as a light sabre-wielding Princess Leia.

BBC Strictly: Ed Balls as Jim Carrey in The Mask

Well, they did try back on Movie Week 2016 but Ed Balls lived to dance another day.

Ed and Katya danced the samba to Cuban Pete from Jim Carrey film The Mask, with Ed in green face paint and a yellow suit.

The judges weren’t exactly enamoured with the routine, giving them 24, but the public loved it.

Strictly Come Dancing is on tonight (October 9) at 6.45pm on BBC One.