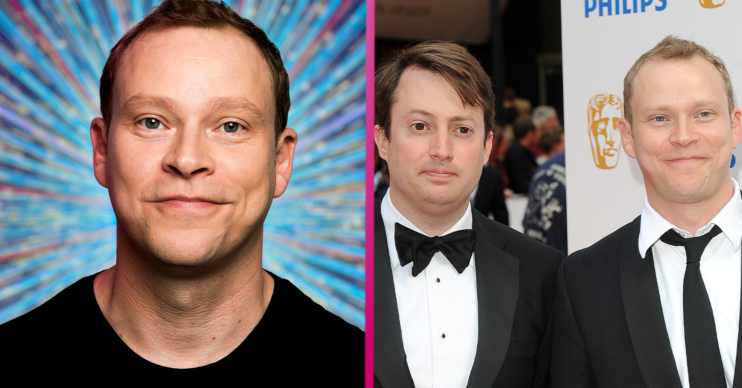 The rest of the cast of Strictly Come Dancing 2021 had better watch out – a dance competition winner is in their midst.

Which should explain why he’s currently the joint second favourite to win with odds of 6/1.

For those who didn’t watch, he danced his way to victory with a parody of the audition sequence from the film Flashdance.

Read more: Why did Strictly pro Neil Jones split from wife Katya? Is he dating anyone now?

With moves like those, we can’t wait for Strictly‘s Movie Week.

Who is Robert Webb?

Robert is an English comedian, presenter, actor and writer, and one half of the double act Mitchell and Webb, alongside David Mitchell.

The two starred in the sitcom Peep Show, which ran for nine series, making it the longest-running sitcom in Channel 4 history.

He’s a regular comedy panelist on shows such as Have I Got News For You, QI and Never Mind the Buzzcocks.

And, on the subject (kinda) of the latter, he also appeared starkers in a film alongside Olivia Colman.

They featured as a naturist couple in 2006 movie Confetti, a film about a competition for the most original wedding.

He’s since said that he thought his meat and two veg would be pixellated out and only discovered at the screening of the film that they were not!

He is indeed married, to the lovely Abigail Burdess, a fellow comedian.

They tied the knot in 2006 after meeting while recording her radio comedy show.

The Webbs now live in London with their two daughters, Esme and Dory.

In his 2017 memoir How Not to Be a Boy, Webb talked about his bisexual past.

He later admitted he identified as “(basically) heterosexual” in a tweet because it “isn’t a going concern any more” and he was “certainly not ashamed but trying to be accurate”.

His own parents divorced when he was five, with his mother remarrying a year later.

Webb’s mother died of breast cancer when he was just 17 and he moved in with his father.

Why did doctors give him two days to live?

In 2020 doctors told Webb he had two days to live before undergoing emergency heart surgery.

The comedian learned he had an undiagnosed heart condition – a mitral valve prolapse – during a medical exam.

It caused him to feel lethargic, but he had assumed it was down to his age and his alcohol habits.

However, Robert was told by his cardiologist that he “would not last two days” if he didn’t undergo an operation.

He lost two thirds of his blood cells during the operation and added: “It was all a bit touch and go.”

Speaking about the scare, he said: “I just assumed, that’s the booze… I thought this is what you feel like when you’re 47 and you treat your body like a skip.”

He then gave up drinking alcohol and admitted: “The drinking crawled up so gradually that I was slow-killing myself…

“It was certainly an addiction at the end, a dependency… I was thinking of [drinking] at any given time of the day.”

Head to our Facebook page @EntertainmentDailyFix and tell us if you’ll be rooting for Robert Webb this year.