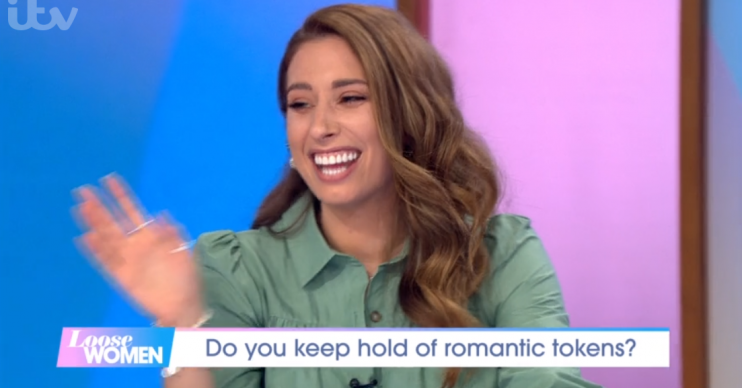 Not clear whose it is

Presenter Stacey Solomon caused a stir on Loose Women when she admitted she’s kept hold of an old foreskin as a keepsake.

On today’s (March 5 2020) episode, the panellists were discussing romantic tokens in light of former footballer David Beckham recently saying he still has the train ticket scribbled with his wife Victoria’s phone number from before they were dating.

Hosts Carol McGiffin, Nadia Sawalha, Kaye Adams and Stacey got to talking about the keepsakes they have had over the years, with Carol revealing she’s kept hold of receipts.

Nadia said: “I haven’t even got my babies’ shoes or a lock of hair or anything… I’ve got nothing!”

Stacey then told them: “I’ve got umbilical cords and all sorts. I’m pretty sure I’ve got a foreskin somewhere.”

As her fellow panellists and the audience erupted into peels of shocked laughter, Kaye cut in: “Listen, hang on! Can I say, of a baby! Of a baby.”

While everyone tried to compose themselves, Kaye joked it might have been from “an ex boyfriend”.

It’s not clear whose it is of Stacey’s three sons, Zachary, 11, Leighton, seven, or baby Rex.

Elsewhere on today’s Loose Women, Stacey talked about the horrific ear injury Joe sustained while training for Dancing On Ice this week.

I’m pretty sure I’ve got a foreskin somewhere.

She said, as the programme aired photos of Joe with the whole top of his head and one ear wrapped in bandages: “It could be [serious], he told me nothing about this, not even, ‘Oh, I might go and see a doctor’. Nothing.”

Recalling the moment she first found out about his injury, she explained: “I’ve been waiting at home for him for hours and hours thinking, ‘God, what is he doing? Hurry up’. He walks through the door like that.

“But obviously, the first thing I did was check he hadn’t had an ice skate chop his ear off.

“Once I had established that that hadn’t happened… I did cry with laughter for a good hour.”

Joe was rushed to hospital for an operation after an accidental kick from his Dancing On Ice skating partner left him with cauliflower ear.

The contestant took a whack to his lughole when he was practising his latest routine with Alex Murphy, but the area became infected, resulting in him needing to go under the knife to have all the “gooey stuff” in his ear drained.

Joe told his fans about the injury and his trip to hospital on his Instagram Stories.