Sir David Jason has claimed that modern comedy is in a “downward spiral” because of the amount of swearing.

The Only Fools And Horses legend, 81, said that TV bosses have “lost censorship” because swearing is out of control.

David Jason says comedy is on a ‘downward spiral’

Sir David starred in hits such as Porridge, Open All Hours, The Darling Buds Of May and the legendary Only Fools throughout the 1970s, 80s and 90s.

But now he says that today’s comedy contains too much swearing.

“You needed to be clever with your dialogue in order to get around things – now you just say it and we are going further in a downward spiral.”

He also described how fans sent him positive feedback for his crime drama Frost, because of the lack of swearing.

Best sitcom of all time

In 2003, Only Fools And Horses was voted the Best Sitcom Of All Time.

It beat out Blackadder and The Vicar Of Dibley in the top 10, which also contained Dad’s Army and Fawlty Towers.

With Porridge and Open All Hours also in the top 10, Sir David featured in three entrants.

In Only Fools, he played Derek ‘Del Boy’ Trotter, a happy-go-lucky Cockney market trader who was always on the look-out for money-making schemes. 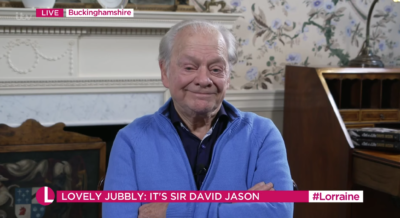 Too long for Only Fools

Writing in his book, A Del Of A Life, Sir David admitted that the show probably went on too long.

“Maybe we did go back to the well a couple more times than we should have done,” he wrote.

“Maybe being rich, as they were, briefly, in 2001, didn’t suit the Trotters as well as being poor.”

He suggested that the show should have finished after the 1996 Christmas Special, Time On Their Hands.