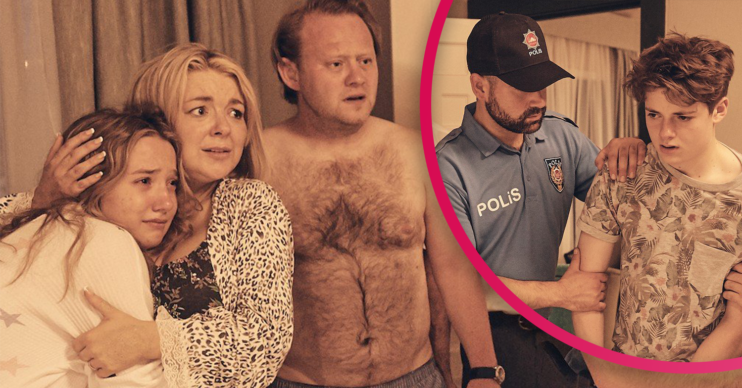 Why did no one call the Embassy?!

New Sheridan Smith drama No Return started on ITV last night, coming off the back of the star’s roles in Four Lives and The Teacher.

In No Return Sheridan plays Cathy, the mum of a teen boy, Noah, who’s arrested while they’re on holiday in Turkey for sexually assaulting another lad at a party.

During episode one, it transpires that Noah had been keeping his sexuality hidden from his family.

Read more: No Return: six burning questions after a very tense episode one

And then the lawyer told the family that the alleged victim was underage, making the charge sexual assault of a minor.

What did viewers think of No Return episode one?

Viewers have been sharing mixed reactions to the Danny Brocklehurst penned drama.

While most loved it, others weren’t quite so impressed.

“#NoReturn. Wow. What a beginning,” tweeted one impressed viewer wrote on Twitter.

Another said: “No return is canny!”

Wow. What a beginning

“Loved the first episode of #NoReturn. Might wait until next week for episode 2 so I’ve got something to watch,” said another.

But others found the drama a bit unbelievable – and called out a glaring plot hole.

“#NoReturn also why have The British Embassy not been involved it’s a bit far fetched,” said one.

“#NoReturn Is someone going to call the Embassy? Anyone?” agreed another.

Read more: What else has No Return writer Danny Brocklehurst written and where can you watch it?

What most viewers managed to agree on, however, was the comedy value of the Turkish lawyer.

“This lawyer in #NoReturn is hilarious,” said one fan of the show.

This lawyer in #NoReturn is hilarious

Is No Return on ITV a true story?

Some viewers were left wondering if the drama was based on true events.

Technically, the answer is no, but Brocklehurst has said it was inspired by some experiences in his own life.

He said: “This originated from a friend of mine who had been tangentially involved in something of a similar nature where a relative of theirs had been caught up in a foreign legal system.

“He told me about the details of this event on a walk we were on one day. I just listened to it as a story that had happened to somebody.

“The story obviously stayed with me and percolated because quite a long time later I suddenly thought, I’ve got two sons, we go on package holidays from time to time, this strikes me as a really good idea for a drama.”

No Return continues on Monday February 14 on ITV at 9pm. It’s also available to watch on BritBox and ITV Hub.