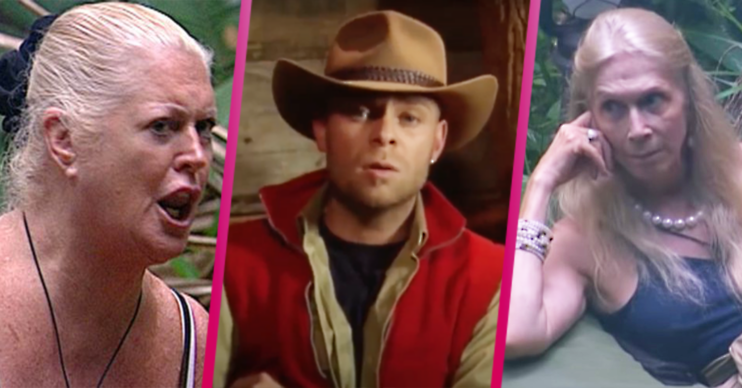 ‘Selfish’ stars and ‘inappropriate’ behaviour: The biggest fall-outs in I’m A Celeb history

The most shocking arguments that we couldn't stop watching

I’m a Celeb will finally be making a return later this month – but will it be as drama packed as some of the years before?

Somehow, we doubt it!

Last year’s I’m A Celebrity was a full-on love-in, but it hasn’t always been that way…

Here are some of the show’s most shocking camp fall-outs that have left viewers at home speechless.

Loose Women panelist Janet Street-Porter got caught in an argument with East 17 singer Brian Harvey after making a remark about his bad habits around the campfire.

Read more: Latest I’m A Celebrity odds reveal who will be first to leave the castle

After he farted, she commented: “Don’t do that when we are cooking, it’s so inappropriate.”

That, in turn, caused Brian to get angry and snap back at Janet in an expletive-filled rant.

“I’m over there, don’t keep [bleep]ing having a go at me about farting. No, no, no. We’re outdoors. Just because you think it’s wrong doesn’t mean everyone else thinks it’s wrong.

“I’m farting because all I’m eating is [bleep]ing beans.”

And, after voicing his opinions, Brian finally decided he’d had enough and quit the show.

“I’m out of here, I’m stuck out here and I’m [bleep]ing hungry and tired like everyone else,” he said.

“I’ve had enough, I’ve got other things on my [bleep]ing mind. Forget this [bleep]. I want out and I want out now,” he said.

I’m A Celebrity’s biggest fall-out ever?

Janice Dickinson and Lynne Franks will go down in history as one of the most memorable feuds in I’m A Celeb history.

It all started when Janice disagreed with the way Lynne was handling food.

The two then continued to bicker throughout the entire time they were on the show.

Read more: I’m a Celebrity’s most iconic Bushtucker Trials ever

The verbal abuse from Janice didn’t stop, with the model calling Lynne a “freak” and a “shrew”.

She even went as far as threatening to “stab” Lynne in her sleep to steal he bed.

Janice told campmate J from 5ive: “I’m going to stab her in the middle of the night and take hers. You think I’m kidding? I’ll eat her [bleep]. I’ll fry up those big old boobs.”

Arguments between Kim Woodburn and Katie Price started when Kim dug into Katie for caring about her looks and “publicity”.

She told Katie: “You live and die for publicity and you do it well.”

Slating Katie’s reasons for entering the jungle, she said: “Look at her little face: ’I’ve come in here because I want some peace.’

“You know full well you’ve got 10 to 12 million people watching every night and you know, madam, you’ll be all over the papers every day. Now stop it. Stop your nonsense,” she stated.

Katie showed no interest in Kim’s nasty comments, but that only riled her up even more.

What started out as a light-hearted discussion quickly turned into a heated argument as Matthew Wright corrected Alfonso Ribeiro on the use of the word “maximum”.

This caused Alfonso to have an outburst claiming he’d “had enough” of the TV presenter.

“Matthew, enough!” he said. “Enough! Okay, enough! I’ve had enough of your [bleep]ing [bleep]. I’m done with you talking about it.”

While Matthew described the explosion as a “completely unnecessary outburst”, Ribeiro complained: “I’ve had enough of his ass.

However, as tensions started to die down, things cooled off between the two.

Edwina and Kendra argue on I’m A Celeb

After Kendra Wilkinson made a remark about how you should “never live your life for other people, ever”, Edwina Currie was quick to lash out.

She then continued with her spat, calling Kendra “selfish” for her beliefs.

The fight ended with Kendra in tears and calling the former politician “heartless”.

“Don’t you wave your finger at me young lady,” Edwina chastised as Kendra lost her cool.

” thought her behaviour was deeply offensive but then the best way to respond was not to respond very much and I didn’t,” Edwina said later.

Hollyoaks star Jorgie Porter appeared to be in Lady C’s bad books after she stood up for her friend Brian Friedman.

The choreographer was being viciously attacked by Lady C, so Jorgie stepped in and said: ” I had so much respect for you. All I’ve said is nice things about you and I’m really disappointed.”

“You have no idea how I have been trying to promote you to the public.”

Poor old Jorgie fled to the Bush Telegraph where she broke down in tear over the exchange.

Things started to heat up between Larry Lamb and Martin Roberts after Larry laid into Martin over his behaviour.

Larry lost his patience with the TV host after he suggested to draw straws to decide who would do the Bushtucker Trial.

After Martin apologised, Larry took it as an opportunity to tell martin to “pipe down”.

He then declared rtin was acting like “the kid in class who’s always sticking his hand up”.

Fans of the show were disappointed in Larry for what he said and accused him of being a “bully”.

When he left, Martin claimed: “Larry tried to undermine me and the group and he tried to turn people against me.”

I’m A Celeb star Larry was quick to respond, though.

“You know there will be people you like and people you don’t really take to.

“Martin isn’t the sort of person I’d be going out with socially, that’s all there is to it.”

So what’s your favourite I’m A Celebrity argument? Head to our Facebook page @EntertainmentDailyFix and tell us.