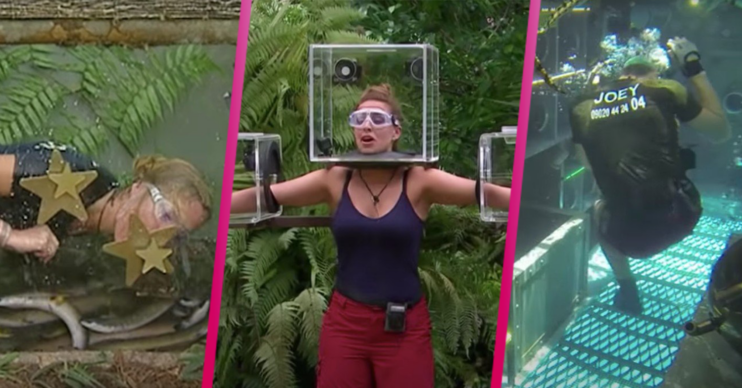 I’m a Celebrity: The most iconic Bushtucker Trials in the show’s 20-year history

These Bushtucker Trials left us all shaking with fear

I’m a Celebrity is coming back to our screens later this month for the show’s 21st series.

To celebrate, new research conducted by Ivory Research has revealed the 10 most popular Bushtucker Trials ever, using data from YouTube.

Prepare to scream as we introduce you the most jaw-dropping Bushtucker Trials with the most views on YouTube.

The Tunnel of Terror left viewers hanging off the edge of their seats when Alex Best had to go from tank to tank collecting stars with only her mouth.

As Alex struggled through the tanks, she encountered creatures you would not want to be trapped in a glass tank with.

One even included snakes which was Alex’s worst fear.

As a result, the trial has since been viewed a whopping 112 million times!

But with a spin, as this is I’m a Celeb after all!

Each time the contestants rolled the dice, a critter was placed in the glass boxes they were confined in.

So much hilarity ensued that 54 million people have watched it since!

Ferne faced the most the gruelling eating challenge in the Bushtucker Bonanza.

She was challenged to choose between eating a familiar food or a gruesome dish.

Read more: All the I’m a Celebrity winners in the show’s 20 year history – can you name the first?

Ferne was certainly not enjoying herself as more and more disgusting foods started to unveil.

She even ate a live spider the trial that’s since been viewed 16 million times.

The Croc Pit was definitely the most terrifying Bushtucker Trial of the show.

Catalina Guirado collected as many stars as she could in a swamp full of live crocodiles!

They even had someone with a gun at hand in case a crocodile tried to get too close.

Some 9.7 million I’m a Celebrity fans have since tuned in to watch it on YouTube.

Model and TV personality Kendra Wilkinson poked her head through famous paintings in The Grim Gallery.

Behind the paintings were boxes of horrifying critters and a star attached to a screw.

In order to win meals for camp, she had to remove the star from the screw by only using her mouth.

She eventually finished in sixth place, and 9.2 million watched her trial.

Amy Willerton shocked everyone at home as she took on Surf and Turf.

The trial required her to hold her breath under water and swim from tank to tank.

She then battled all kinds of snakes and eels as she collected stars for camp.

After her exit, the trial was viewed 7.1 million times online.

Kendra Wilkinson and Melanie Sykes showed great team work as they worked together in the Critter Conveyor.

The challenge required them to collect as many star pieces as they could from a conveyor belt while trapped in a box full of critters!

Some 6.8 million people have since tuned in to watch the ladies in action.

Lady Colin Campbell’s last challenge of the series was certainly a memorable one!

During the trial, Lady C half submerged herself in a tank filled with water.

And to add to the nightmare she also wore helmet of snakes and other awful critters.

After it went online, 5.4 million viewers tuned in to watch!

Ashley Roberts went through a series of horrible situations as she was challenged to search for stars on the Terror Train.

Although 4.2 million have watched it since, it’s definitely not a train anyone is planning on boarding this train any time soon.

Reality TV star Joey Essex swam around in a submarine filling with water in the Bushtucker Trial Submerged.

But just like every other Bushtucker Trial, he certainly wasn’t alone.

The star was also welcomed with eels and crocodiles in the challenge that’s been viewed 4 million times.

Which is your favourite Bushtucker Trial? Head to our Facebook page @EntertainmentDailyFix and tell us.