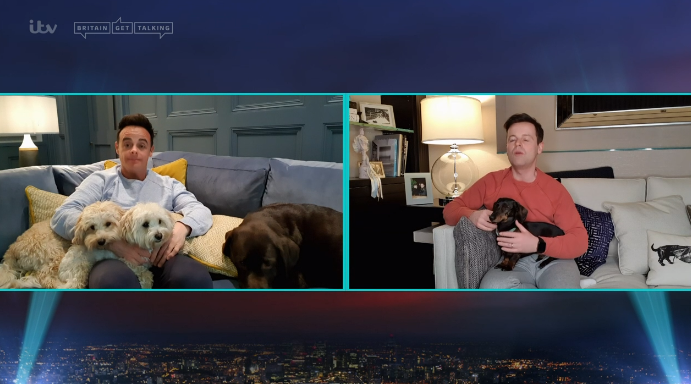 The pair hosted from their houses

Viewers of Saturday Night Takeaway were defended Ant McPartlin after he playfully pushed his dogs off his sofa.

On Saturday’s show (March 28), Ant and co-star Dec Donnelly hosted the one-hour show from their houses because of the coronavirus.

The pair were joined by their adorable dogs midway through the show and viewers couldn’t get enough.

However, the pair told their dogs to get down as they moved on to another segment.

Ant appeared to push his dogs off – something that has left some viewers unimpressed.

Did Ant McPartlin just launch 3 dogs off his sofa?

One person wrote on Twitter: “Did Ant McPartlin just launch 3 dogs off his sofa?”

Another said: “Anyone else feel sorry for Ant’s dogs? What was that?!”

A third added: “Ant throwing his dogs was so unnecessary. They’re only little, be careful.”

Anyone else feel sorry for Ant’s dogs? What was that!? #SaturdayNightTakeaway

Ant throwing his dogs was so unnecessary. They’re only little, be careful. #SaturdayNightTakeaway

However, others took it light-heartedly.

One person said: “The way Ant just launched all his dogs of the couch. Await for all the animal cruelty folk moaning.”

Another tweeted: “Actually crying laughing at Ant throwing his dogs away on #SaturdayNightTakeaway.”

One added: “Cue the people complaining about the way Ant threw his dogs.”

Actually crying laughing at ant throwing his dogs away on #SaturdayNightTakeaway
😂😂😂

A fourth insisted: “I’ve got to say, all these people having a go at Ant for ‘chucking his dogs’

“We had to rewind to see and he literally threw them right next to him back onto his sofa. People need to get a grip.”

Meanwhile, Dec explained why they were hosting from their houses at the start of the show.

He said: “For obvious reasons, we’re presenting this week’s show from our houses.

“But reassured there will be no dropping of our normal standards.

“Me and Ant realised we were just going to be staying home and watching the show on TV.

“So we thought why don’t we all watch it together and have a laugh at the same time.”

What did Ant say?

Ant explained: “For the next 60 minutes, we’re hoping to put smiles on your faces with the help of classic moments from the show plus the final of Men In Brown.”

Leave us a comment on our Facebook page @EntertainmentDailyFix and let us know what you think of tonight’s show.