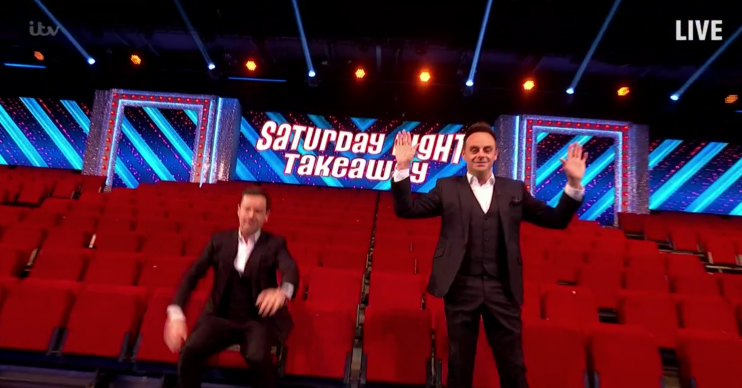 Saturday Night Takeaway: Ant and Dec praised for cheering up the nation

Saturday Night Takeaway was forced to ditch the studio audience – such an integral part of the show – this evening due to the coronavirus epidemic.

And while it initially seemed odd to see Ant and Dec standing alone, but for a few crew members and Star Guest Announcer, Joel Dommett, the lads were soon in their stride and putting a smile on viewers’ faces.

Many were full of praise for the Geordie duo, thanking them for raising the nation’s collective spirits in dark and uncertain times with the ITV fave Saturday Night Takeaway.

One viewer declared on Twitter that we are so lucky to have them… and don’t deserve them!

so lucky to have @antanddec still bringing a smile to all of us during such an awful time, they said they’re going to keep doing it to make us laugh until they’re no longer allowed to, we don’t deserve them🥺 #saturdaynighttakeaway

Another wrote: “Ant and Dec showing why they’re national treasures.”

A third posted: “Ant & Dec’s Saturday Night Takeaway is just what I needed tonight. God bless these two for making us all laugh right now.”

And one delighted fan commented: “Ant and Dec’s laughter is the most precious thing ever.”

Ant and Decs laughter is the most precious thing ever🥺😭❤ #SaturdayNightTakeaway

On with the show!

The hosts announced yesterday that Saturday Night Takeaway would be going ahead this weekend without a studio audience.

They issued a plea to viewers to help them out with the End of the Show Show and asked for families to submit videos.

“We have no studio audience this week so we want YOU, the audience at home, to be the stars of the End Of The Show Show,” they wrote.

“Film yourself, your family, your pets, whatever, dancing along to Olly Murs’ Dance With Me Tonight at home, for at least one minute then submit it to us.

“And you could end up as part of a brilliant EOTSS! See you (and yourself!) on the telly!!”

We have no studio audience this week so we want YOU, the audience at home, to be the stars of the #EndOfTheShowShow…..

Ant and Dec appeared on Friday’s This Morning and Dec admitted that they didn’t know whether there would be further episodes this series after this Saturday’s.

However Dec appeared to confirm they would be back next weekend with the final of Men In Brown. Let it be so, ITV!

Is tonight’s Saturday Night Takeaway putting a smile on your face? Leave us a comment of our Facebook page @EntertainmentDailyFix and let us know!