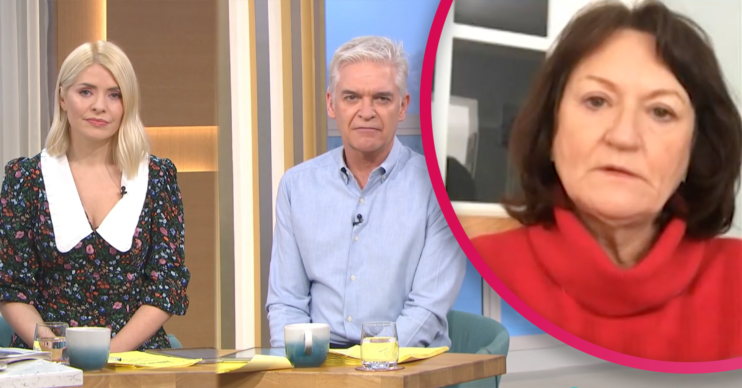 She suggested women wear running shoes 'so they can run away'

This Morning’s female safety phone-in caused controversy today (March 11) after the latest news that human remains had been found by officers involved in the hunt for missing Sarah Everard.

Retired Met Police officer Sue Hill appeared on the show to take part in a phone-in about how women can stay safe on the streets.

It follows the disappearance of Sarah, 33, and the subsequent #ReclaimOurStreets campaign.

As-yet-unidentified human remains have been found and a police officer has been arrested on suspicion of her kidnap and murder.

Phillip Schofield and Holly Willoughby led the This Morning phone-in with Sue today.

After the callers, Phil asked Sue for advice on how women can stay safe when out on their own at night.

She said: “The main things are, and probably people will shout at me, but one of the things I always taught my daughter was when you’re out and about on your own, always be aware of our surroundings.

Some woman on This Morning has just suggested that women should wear shoes that they can run away easily in?? Is she sure?

“If you’ve had a few drinks you are more vulnerable because you’re more likely to take more risks.

“It is not women’s responsibility to keep themselves safe, they should be allowed to walk out there, of course they should, but we all know they can be more vulnerable if you are out and about late at night.”

Taking calls this morning on @thismorning how to stay safe in light of recent events. Hope to reassure women who are living or go walking on their own how to stay safe. Our thoughts are with Sarah’s family & friends. But cases like this are very rare & we are all shocked & sad.

Sue added: “So be aware of your surroundings, be alert, make sure that you’re wearing shoes that you can run away if need be.”

She continued that women should “also take your headphones out” and “keep looking over your shoulder”.

Sue added: “Have the Find Friends app, let your friends know where you are.

“If you’re going out online dating make sure you’re meeting someone out in public, where there are CCTV cameras, where you’re not putting yourself at risk.”

What did viewers say about the latest phone-in?

Sue’s comments didn’t go down too well with This Morning viewers.

“Make sure you are wearing shoes you can run away in?!” said one. “Sorry, that is utter [bleep].”

“Some woman on This Morning has just suggested that women should wear shoes that they can run away easily in?? Is she sure?” asked another.

“Wear shoes you can run away in, don’t wear headphones and be aware if your surroundings…How depressing,” said another.

“So basically the lady on #thismorning is saying WE need to wear trainers when we go out for the night, in case a man decides he wants to attack us and we need to run,” another commented.

“‘Make sure you can wear shoes where you can run away’? No I will wear my heels and use my stiletto as a weapon. This woman can’t be for real,” another declared.

“This woman on #thismorning is infuriating me. Make sure YOU wear trainers so you can run away, don’t listen to music or have headphones in so YOU can hear more clearly,” said another.

“I can’t believe theres a police woman on live television telling us not to have headphones in and keep looking over our shoulders,” another viewer commented.

“Wear shoes so you can run away if you need to…”??? #ThisMorning pic.twitter.com/W4RulgSd7H

Sarah Everard latest: ‘Tell men not to attack us!’

Others argued that the women shouldn’t have to change their behaviour when out on their own late at night.

“How about educating men to be less abusive,” said one.

“Why tell women to be aware of their surroundings or not to be drunk? Tell men not to attack us!” screamed another.

“Women should not have to modify their behaviour,” said a third.

“How about SOME men don’t assault or kidnap people?! How about that?!” another angry viewer said.