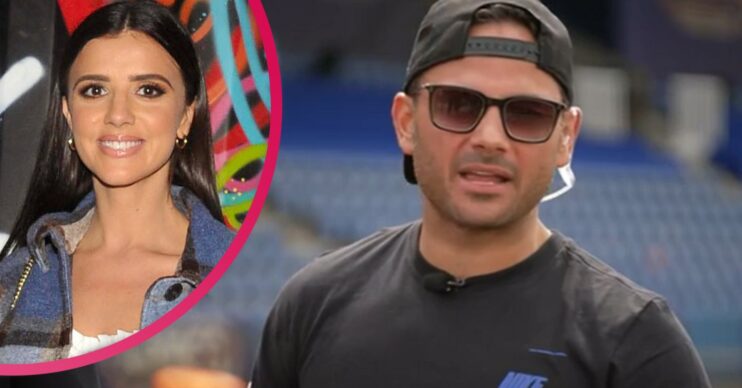 Ryan is expecting his second child with Lucy

Ryan Thomas told This Morning viewers his fiancée Lucy Mecklenburgh is ready to give birth this week!

The Coronation Street star is expecting a little girl with the Towie star and can’t wait to meet the new arrival.

However, he hopes she doesn’t make an appearance just yet because he’s about to make his debut on The Games.

The couple are already proud parents to son Roman, two, and adore Ryan’s daughter Scarlett, who he shares with his ex, Tina O’Brien.

Lucy is now heavily pregnant and according to Ryan, could give birth any day.

The star was talking to Phillip Schofield and Rochelle Hulmes about his experience on ITV’s The Games.

Ryan was joined by Christine McGuinness and Corrie’s Colson Smith ahead of the show’s debut tonight.

Phil joked he could seen Ryan checking his phone and asked him how close Lucy was to giving birth.

Ryan replied: “This week close. She sent me a picture this morning and I can’t tell you how low this baby looks. If this little girl comes this week, I am out of the show so fingers crossed I get to the end of it.”

Read more: Ryan Thomas admits ‘jealousy’ over son Roman: ‘Lucy is obsessed, what about me?’

However if the baby doesn’t arrive this week, Ryan said Lucy will hopefully join him on Friday.

He added: “If she goes into labour on Friday that will be great because I’ll be here with her.”

Cradling her baby bump, she said: “Gotta stay in a week!”

Ryan will join a host of celebs including The Wanted’s Max George and Strictly‘s Kevin Clifton being put through their paces.

We wish Ryan, Lucy and their new baby all the best – whenever she arrives!

The Games begins on Monday, May 9 at 9pm on ITV. Elsewhere, episodes will also be available on ITV Hub.