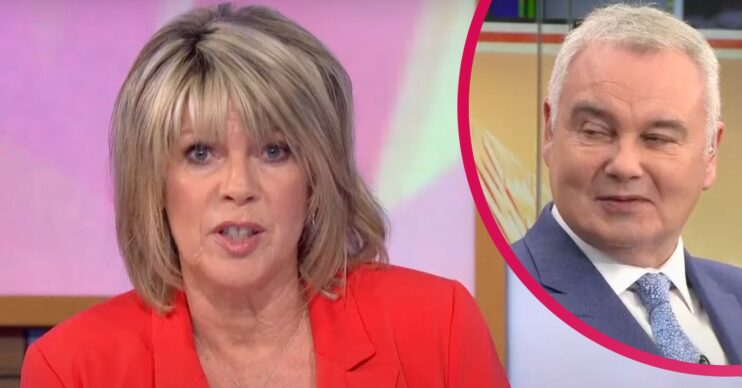 Ruth Langsford issued a warning to her husband Eamonn Holmes during today’s edition of Loose Women (Monday, May 9).

She warned the GB News presenter that he “should be worried” and that she has a “big bone to pick” with him.

Eamonn was playing with fire on Saturday (May 7) with a tweet he made about his wife, Ruth.

The 62-year-old took to Twitter to take a swipe at Ruth for his one million followers to see Saturday morning.

“Little could I have imagined that a simple question asked outloud like ‘Where do we keep the Eggcups?’ would have got the day off to such a fractious start,” he tweeted.

Plenty of the presenter’s followers saw the funny side of his tweet.

However, Ruth didn’t, and called her husband out on Loose Women earlier today.

During today’s edition of Loose Women, Ruth took the opportunity to warn her husband that he should be “worried” after his latest tweet.

“Eamonn Holmes, darling, you should be worried now,” she said.

“Right I have a big bone to pick with my husband because I did not know this had gone on. I just saw a headline which popped up on Google,” she said.

She then showed the Loose Women the headline in question. It stated that Eamonn is in Ruth’s “bad books” after an “innocent” question led to a “row”.

“I was like, ‘What? Where has he said that?” she said of the story.

Ruth then read out the tweet that Eamonn had made on Saturday morning.

Explaining the tweet, Ruth said: “Yes, that did happen because he never knows where anything is.”

Plenty of Eamonn’s followers anticipated that he would be in Ruth’s “bad books” thanks to the tweet.

“Oh dear Eamonn. Hope you’re not in the bad books now,” one of his followers wrote at the time.

“Completely,” he replied. He added a few eye-rolling emoji’s to his tweet too.

“#eggcupgate looking forward to an update on Monday morning,” a third wrote.