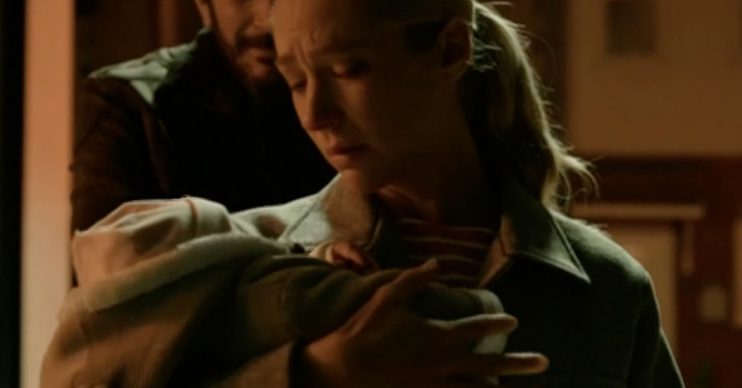 What will happen to Harmony now?

Last night’s Casualty was an emotional rollercoaster—as Ruby was left stunned and traumatised by her sister’s shocking overdose death.

And while viewers were impressed by the emotional episode, they were left fuming with the BBC…

Last week Ruby demanded Violet go to rehab, telling her she was applying for guardianship of her baby daughter Harmony until her sister managed to get herself clean, once and for all, which Violet vowed to do.

Not surprisingly the relationship between the siblings had become strained, as Ruby struggled to believe anything Violet told her, following years of junkie-related lies and manipulation.

Violet did check herself into rehab however, for a six-week stint, and kept focused on getting Harmony back as she suffered violent withdrawal symptoms.

However, her vulnerable state soon drew the attention of Carol, another patient, who claimed to have been in the facility for weeks, and presented as being clear-headed and kind-hearted. It was obvious from the start, though, that she wasn’t quite who she seemed.

During a family therapy session, which Ruby claimed she couldn’t attend because of work commitments, despite multiple offers to cover her shift for her, Violet’s mental and emotional state started deteriorating even further.

When asked to list one “positive” and one “negative” of her family, she wrote “Ruby” as both, explaining: “She’s amazing and funny and really sorted, but she can be super judge-y and I’m scared of her. She has my baby and I think she hates me.”

After a scuffle broke out, Violet came to the aid of her new ‘friend’ Carol, saving her from being stabbed with a pair of scissors by a fellow patient.

Ruby arrived just as the drama was going down, and was shocked at the facility her sister was in, and by how much she was struggling mentally, in addition to suffering excruciating pains in her back, which, Ruby presumed were due to heroin withdrawal.

The rehab manager gave the two sisters some alone time to talk things through and during a heartbreaking exchange Violet begged her sister to take her away.
“I know I messed up, I know I let Harmony down, but I love her so much,” she pleaded. “I’ve been thinking, remember when we used to go away in a camper van? We could do that again, we could have so much fun, just you, me and Harmony.”

Ruby shot the plan down though, telling Violet she wasn’t ready to leave yet, and that she couldn’t be trusted to even see Harmony at this point. She then turned her back on her sister and walked away.

Violet was left sobbing and terrified she would lose her baby forever, obviously in great mental anguish and pain.

Cue Carole, who strolled into the room to offer some comfort and advice.

“I’d trust a junkie before I trusted my family,” she said. “It wouldn’t surprise me if [Ruby] has already set up adoption papers and you’ll never see Harmony again. You just need a break,” handing a syringe of heroin to Violet.

It wasn’t long before Ruby received a call-out to the rehab where a 29-year-old had just OD’d. She knew immediately it was her sister.

But by the time the ambulance arrived, Violet had stopped breathing and was pronounced dead.

Ruby was stunned and traumatised by her sister’s shocking overdose death, blaming herself for not realising Violet’s back pains weren’t from withdrawal but from a large aortic aneurysm.

Ruby was also left holding the baby, cradling newly orphaned Harmony as she sobbed over the loss of her sister.

It was a tear-jerker, and Twitter was ablaze with sympathy for Ruby, as well as praise for Kelly Gough’s amazing portrayal of Violet.

Such a moving episode of #Casualty this evening. Well done @maddy_hill90 still think you deserve an award for your acting.

#BBCcasualty #casualty Moving but nonetheless disappointing episode. What message does this send to addicts? That they can never get a happy ending? Drugs will always get them in the end? Violet Spark deserved a happy ending. Addicts deserve a happy ending.

why have they got to kill off violette? bit rude of the bbc #Casualty

@maddy_hill90 giving yet another acting masterclass tonight Sorry to see Violet go as i loved the complex relationship between her and Ruby. I’m interested to see where Ruby goes from here with baby Harmony though #Casualty

@maddy_hill90 I am always blown away by your performances. Tonight was really moving, not to mention the writing giving respect and detail to that storyline. #casualty @BBCCasualty

There was also a lot of rage on Twitter, as the BBC had accidentally advertised the wrong start time for the show, meaning some viewers missed 10 minutes of the gripping action.

The official Twitter page for the show messaged: “This week’s Casualty starts in one hour! 9.20pm on BBC One!”

A third reproached: “You tweeted the wrong time!”

What did you think about Violet’s tragic death? Leave us a comment on our Facebook page @EntertainmentDailyFix and let us know your thoughts!