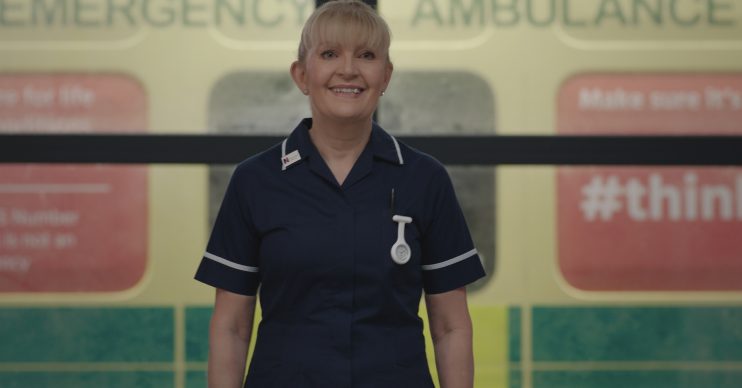 Cathy Shipton, who plays Duffy on Casualty, has revealed the reason for her exit from the show.

Since Casualty first aired in 1986, Cathy has played Lisa Duffin who is known as ‘Duffy’.

This Saturday (February 1) the actress is set to leave the show after playing Duffy for the past three decades across a number of stints over the show’s 33-year history.

I knew I didn’t want to stay forever.

After taking a break from the show, Cathy returned in 2016 and has played Duffy for the past three years. Although she was pleased to return, Cathy told Digital Spy that she had never planned to stay long-term when she returned.

When asked how the dementia storyline came about, Cathy said: “There was a movement between the show to take on long lead stories – stories that last longer than one episode or a month. These stories were going to play out over a long period of time, like Iain’s depression story.”

“They approached me and asked what I thought. I hadn’t said this to them but I already knew when I went back four years ago that I wouldn’t want to stay forever.”

She continued: “That married with this and I knew I’d want to see the story through. They planned it out over the last two years so, in a way, it was a mutual thing.”

Cathy has already filmed her final scenes as Duffy and said: “I think it was worse for everyone else, than me. I was more emotional two years ago when we started talking about this as a potential storyline.”

She revealed that once she had discussed the storyline with bosses and seen the “amount of care and time” they were going to take over it, she “realised that it was a really important piece of work.”

When asked about her exit, Cathy said: “When I first read these scenes I was very affected by the script. When we filmed I was totally in the moment, so I didn’t cry but I had a frog in my throat and was completely goosebumped.

“I remember saying, this is going to be such a hard watch. There won’t be a dry eye, I can tell you.”

It has been reported that Cathy’s final scenes include on-screen husband Charlie, played by Derek Thompson, frantically searching for Duffy as her condition deteriorates even further after she wonders outside into freezing temperatures.

Will you miss Duffy when she leaves? Head to our Facebook page @EntertainmentDailyFix and leave a comment to let us know.