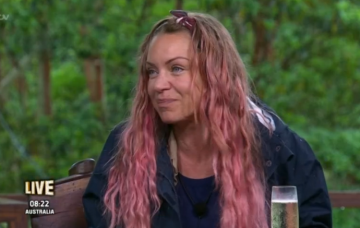 She's been away from them for a month

Rita Simons has finally been reunited with her twin daughters after her stint on I’m A Celebrity.

The former EastEnders actress returned from Australia last week but she had to take part in a panto, meaning she’s been away from her daughters for a month.

The 41-year-old shared a picture on Instagram of her hugging her 12-year-old daughters Maiya and Jamiee.

She wrote: “Haven’t seen my babies for over a month! And finally I get to do this!”

Haven’t seen my babies for over a month! And finally I get to do this! ❤️❤️❤️❤️❤️

After two-and-a-half weeks in the jungle, Rita took to the stage as the Evil Queen in Sleeping Beauty at the Bournemouth Pavilion without even having a dress rehearsal.

Rita, who is married to Theo Silveston, has previously revealed that her daughter Maiya was diagnosed as deaf at four-years-old.

However, having a cochlear implant in 2014 has not only improved her hearing, but she now hopes to become a stage actress just like her mum.

Rita told The Sun: “When we were told that Maiya, at five months old, was deaf it was shattering and I was in complete denial. Test revealed she has enlarged vestibular aqueducts – a genetic deformity of the inner ear.

“She’s profoundly deaf in her right ear and is partially deaf in her left ear, but a cochlear implant four years ago and hearing aids have changed her life. Before that, she used to have tantrums because she was so frustrated at not being able to hear properly.”

She continued: “Today she has an incredible singing voice, impeccable speech, an ear for accents and her talent even won her a place at drama school. She has her own agent and has auditioned for West End shows.”

Rita, who cringed when she was told her ‘loud fart’ on I’m A Celebrity had gone viral, admitted her time in the jungle was “so much harder” that she expected.

She said during her exit interview with hosts Holly Willoughby and Dec Donnelly: “It was so much harder than I ever thought it would be. It’s bloody hard. The thing that killed me the most was the boredom.

“I’m sitting in camp and I’m no good at sitting around. That killed me the most.”

Who would you like to see head to the jungle next year? Leave us a comment on our Facebook page @EntertainmentDailyFix and let us know what you think!