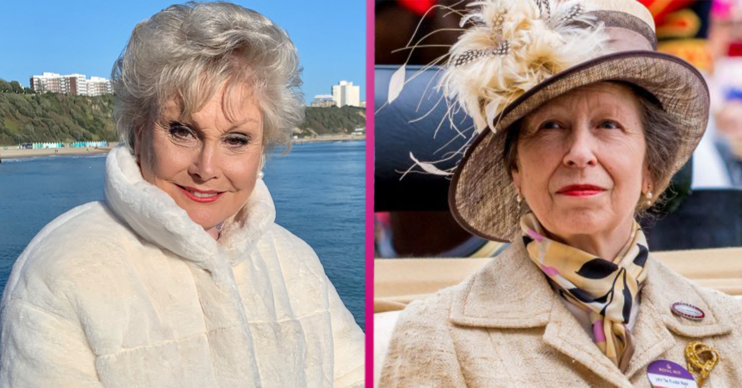 She had to deny links to Princess Anne's husband

Rip Off Britain host Angela Rippon is something of a national treasure and one of television’s most famous faces.

But the presenter once had to deny a scandalous affair with Princess Anne‘s first husband, Captain Mark Phillips.

Angela was busy writing a biography about the former event rider when she found herself having to field off rumours of a fling.

Along with many members of the royal family, Angela shares a love of horses.

The Queen’s daughter, Princess Anne, was even the first-ever royal to compete in the Olympics.

She rode for the British equestrian team in the 1976 Games in Montreal, Canada.

So it was no surprise when Anne married fellow Olympian rider Mark and went on to have two children, Peter and Zara, with him.

Captain Mark had a successful career as an event rider and, when the time inevitably came for a biography to be written about him, Angela was the one to do it.

While working on the book in the early 1980s, Angela became a regular house guest at Anne and Mark’s home in Gatcombe Park.

Why did tongues start wagging?

Despite having nothing more than a good working relationship with Captain Mark, tongues soon started wagging.

In a 2006 interview with The Scotsman, Angela revealed how she had to pour cold water on some scandalous rumours.

She told the publication: “Suddenly the papers were full of these stories that I was having an affair with Captain Phillips.

“I was spending a lot of time with him so these dirty minded reporters decided we must be having an affair. I went through the most dreadful time. It was so sexist – the worst of the tabloids at work.”

Angela, who also hosts The Wall alongside EastEnders star Danny Dyer, went on to say how humiliating she found the experience.

“It was deeply embarrassing and incredibly upsetting. I was there doing a professional job. They wouldn’t have got away with it today. Since then the law has changed, but back then I couldn’t even sue them for libel.”

So is Angela friends with Mark now?

Despite the scandal, Angela managed to stay on good terms with both Princess Anne and Captain Mark.

The royal couple divorced back in 1992 but remain close friends.

Angela and her husband Christopher Dare separated in 1989.

The scandal didn’t do any harm to Angela’s career and she went on to become one of the most recognised faces on British TV.

As well as Rip Off Britain and The Wall, Angela co-hosted Prince Harry and Meghan Markle’s wedding coverage in 2018.

She’s also a successful author, having written a series of children’s books in the 80s featuring a character called Victoria Plum.

Rip Off Britain airs tonight (August 26) at 7pm on BBC One.