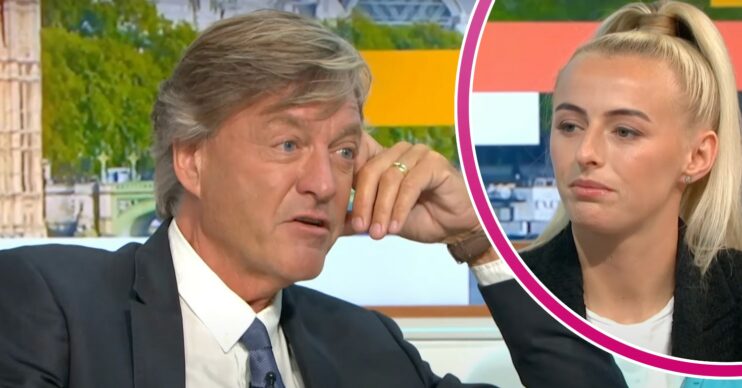 However, Richard’s behaviour during the interview had some viewers cringing, with many taking to Twitter to slam the 66-year-old.

During today’s edition of Good Morning Britain, Richard and Kate welcomed Chloe onto the show.

Chloe, of course, scored the winning goal in Sunday’s final between England and Germany.

During the show, Chloe spoke about scoring the winner, and the impact England Women’s team has made now they’ve won a major trophy.

However, it was what Richard said at the end of the show that grabbed viewers’ attention.

“Chloe, or ‘Coco’ as I call my daughter Chloe, Coco, thank you very much indeed for coming in,” he said. Chloe simply smiled politely in return.

Many viewers found Richard’s nickname for Chloe to be pretty weird, with some finding themselves cringing over it.

“Richard calling that lioness footballer the same nickname he calls his daughter is just creepy and totally inappropriate. She’s called Chloe, not Coco!” one viewer tweeted.

“Richard Madeley is creepy, you just DONT Call Chloe Kelly “Coco” because that is what you call YOUR Daughter who is called Chloe. Show respect you Creep!!” a third ranted.

“I’m still trying to get my head round why Richard Madeley felt it was appropriate to call Chloe Kelly, ‘Coco’ just because that’s what he calls his daughter?!?” another tweeted.

Elsewhere in the interview, Chloe spoke about her and her fellow Lionesses’ incredible achievement.

“It hasn’t settled in yet,” the 24-year-old said. “I think I’m just living in the moment and not really looking at my phone too much.”

Speaking of the manager, Sarina Wiegman, she said: “She’s an amazing woman, honestly. The girls – we love her.”

Speaking about the goal she scored, she said everything was a blur until “I took my shirt off”.

Chloe then spoke about taking her shirt off to celebrate the goal – a moment that is already being described as iconic.

“Just that moment, everything is a blur, and you celebrate for what the moment is,” she said. “And not [thinking] am I allowed to take my shirt off”.