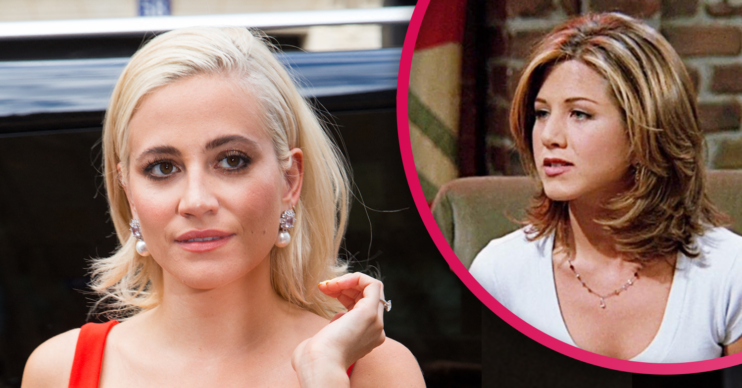 The singer is a huge fan of Friends

The Voice Kids mentor is famous for her trademark platinum blonde hair.

But she decided to give herself a bit of a makeover after growing bored during lockdown.

Speaking to Lorraine Kelly, she said: “I got [back in the salon] as soon as they opened and I couldn’t wait because my roots were pretty bad.

“I’ve always wanted to go darker but I’ve just never had the time because it’s quite a big process to change your colour.”

Pixie added: “I thought my roots have grown out so let’s go darker.

So I did that on Saturday – it’s called the undone blonde or honey brown colour.

“I just got bored of my hair during lockdown and thought post lockdown I want to look a little bit different.”

When decided what colour to go, Pixie revealed Jennifer Anniston’s character in Friends, Rachel Green, was her inspiration.

She said: “I was sending reference pictures back and fourth to my colourist and Rachel was definitely the number one inspiration.

“I was like I love the hair colour and she did it exactly the same.”

Another added: “The new hair colour is fabulous! Absolutely love it.”

Moments later, a third tweeted: “The new hair colour does suit you.”

Shortly after, a fourth commented: “@PixieLott you look so beautiful with this new hair.”

During her chat with Lorraine, Pixie revealed that she has had to postpone her wedding to boyfriend Olive Cheshire due to lockdown.

The couple were set to exchange vows in September.

However, they have decided to push back their big day because their guest list is so big,

“It’s so tough for any plans at the moment because the top words are uncertainty and unprecedented times,” the singer added.

“This year was finally the year when we had plans to make it all happen and obviously because of the situation we can’t really book anything.

“We’ve got a big family and the rules are restricted at the moment.

“I think you can only have like 30 guests – and that’s my bridal party alone.

“We’re going to wait until the rules relax a bit before we set stuff in stone.”