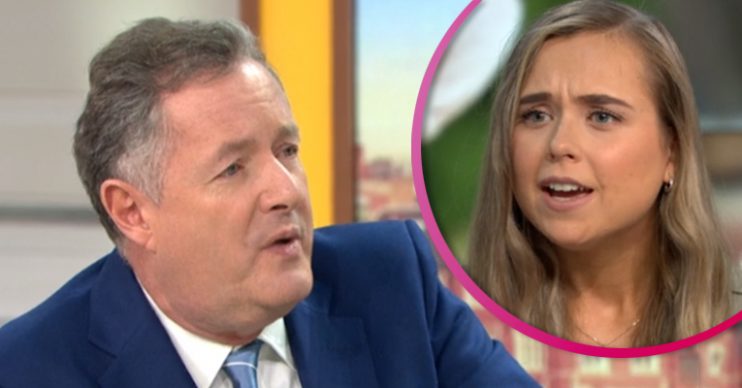 The issue was debated on Tuesday’s show after President of PETA Ingrid Newkirk called on animal owners to stop using the word ‘pet’, claiming it’s a derogatory and patronising term comparable to the treatment of women before feminism.

The animal rights group has said we should start using terms like “companion” to describe our cats, dogs, rabbits etc.

However, Piers didn’t agree and branded the suggestion “ridiculous”.

Senior Media Officer at PETA, Jennifer White appeared on the programme to debate the issue with Piers and Susanna Reid.

Oh for God’s sake, you don’t even believe this guff.

Jennifer began: “A lot of people at home who have dogs and cats refer to them as pets and they refer to themselves as owners, and this implies that the animals are a possession.”

However, Piers interrupted: “Oh for God’s sake, you don’t even believe this guff.”

Jennifer said: “When you refer to animals, not as the living beings that they are, but as an inanimate object, it can reflect our treatment on our animals.”

‘We don’t hate the word pet we’re encouraging people to use something better like companion.’

Piers hit back: “You want to ban the word pet but you want your organisation to carry on being called Peta?

“Do you see the problem? But pet is offensive. I’m offended by the use of the word pet.”

Piers also blasted the list of anti-animal phrases PETA wants to get rid of which include “let the cat out of the bag,” “bring home the bacon” and “take the bull by the horns”.

Piers asked Jennifer: “One-trick pony, what’s your problem with that? Tell me why one-trick pony is wrong.”

Jennifer hit back: “We don’t need to go through every phrase, we’ll be here all day.”

Piers ranted: “Actually we do because if you want to change the language, I would like to know why. What is wrong with one-trick pony? Some ponies love doing tricks.

Jennifer replied: “We’re not saying this. No one is saying this. You should know the power language has. All we are doing is providing better phrases that people can use.”

Viewers were divided over the debate, with many siding with Piers.

What on EARTH next!? I thought I’d woken up on April Fools Day. @piersmorgan I think I will immediately ‘identify’ as an animal psychiatrist to help all these distraught dogs that are struggling with being called a PET! Well done on verbally dissolving her #GMB 😂😂

Can’t call your pet “Pet” apparently? What on earth has this world come to. 🤦‍♀️ #gmb

Oh my god I have heard it all. #GMB Now we can’t call our pets “Pet” as far as PETA is concerned. Also terms like bring the bacon home or don’t let the cat out of the bag, because apparently it is very cruel to have a cat in a bag. GET THESE PEOPLE OFF MY TV.

But others defended Jennifer and PETA.

Why didn’t the woman from PETA give @piersmorgan a slap? It could have been such an interesting conversation without his trivialisation. I guess it was because she doesn’t like cruelty to animals.

I usually love #piersmorgan but poor jennifer on #gmb this morning isn’t getting a word in over his constant shouting at her!!

Do you think the word ‘pet’ should be banned? Leave us a comment on our Facebook page @EntertainmentDailyFix and let us know.