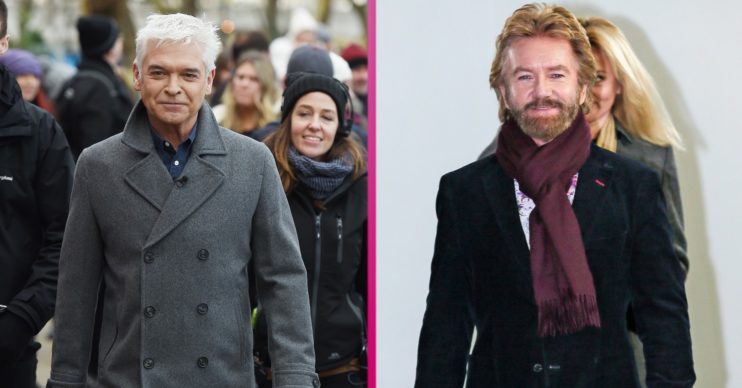 The pair clashed on This Morning back in 2016

Phillip Schofield has called his spat with Noel Edmonds a “terrible shame” after the pair clashed on This Morning.

The 58-year-old presenter opened up on their row in his new autobiography Life Is What You Make It.

It comes over four years since the Deal or No Deal star had an explosive argument with Phillip and co-star Holly Willoughby on the ITV show, branding them “aggressive, disrespectful and dishonest”.

Detailing the row in his new book, Phil told fans he was disappointed after idolising Noel for years.

He said: “I always cited him as my TV inspiration.

Read more: Phillip Schofield reveals Fern Britton failed to reach out after he came out as gay

“Sadly, many years later, he and I would strongly disagree over an interview on This Morning when he suggested that ‘negative energy’ could cause cancer.

“I still take a different point of view to Noel, but I think it’s a terrible shame we fell out over it.”

What happened between Phillip and Noel?

Back in 2016, Noel appeared on This Morning to defend his views that “negative thoughts can cause cancer”.

The Mr Blobby star – who was diagnosed with prostate cancer in 2013 and blamed the stress in his life – also took to the show to promote a £2.3k “sound wave” machine that he claimed helped “cure” him.

After Phil and Holly questioned his pseudo-science, Noel ranted that he’d been “stitched up”.

He said: “Phil, if you are unlucky enough to be seriously ill, I promise I won’t be so callous and I will show you respect, sympathy and compassion.”

The presenter labelled Piers, 55, “deceitful” after the journalist asked for “memorabilia” of his, with Phil believing he was penning a series of articles about him.

He explained: “I was furious. Not so much that he had written the book, but that he had deceived me.

“We didn’t speak for a long time. There were awkward moments: once, the two us were in a lift for what felt like an endless descent.”

Thankfully, the two patched things up with a simple handshake.

Phil added: “It was time to make up. He was nervous when I walked over. ‘Enough,’ I said, and I shook his hand. We’ve been fine ever since.”