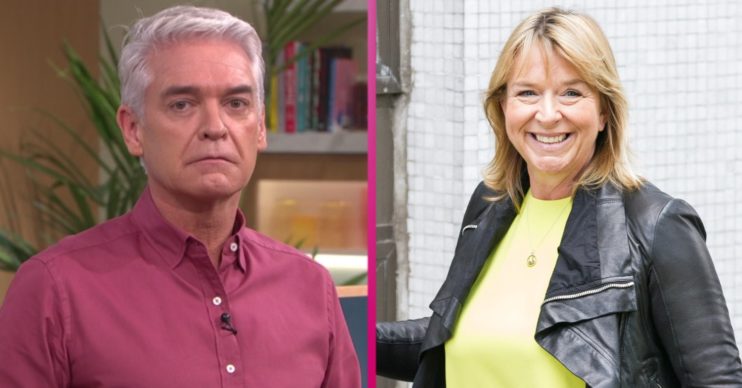 The former co-stars hosted This Morning

Phillip Schofield has revealed once close friend Fern Britton failed to get in touch after he came out as gay.

The 58-year-old presenter admitted he misses her “deeply” after trying to “make it right” over the years.

The former co-stars hosted This Morning together for seven years until Fern was replaced by Holly Willoughby.

What did Phillip Schofield say about Fern Britton?

In his new book Life’s What You Make It, Phil said: “When I came out, she didn’t text me. She did text Steph though, which was really kind.”

The ITV star later claimed he and Fern had a backstage row in 2009 over the show.

When I came out, she didn’t text me

Following the argument, she accused Phillip of “meddling”.

He shared: “I walked back into the makeup room and calmly said, ‘Please don’t do that to me again.’

“I think, for whatever reason, that was the point Fern decided she didn’t want to do This Morning any more.”

When did Phillip Schofield come out as gay?

Phil came out as gay in an emotional statement back in February.

It read: “You never know what’s going on in someone’s seemingly perfect life. So you won’t know what has been consuming me for the last few years.

He also appeared on This Morning alongside his close friend Holly and spoke about coming out.

At the time, Fern admitted she “felt” for Phillip’s wife Stephanie following the news.

Speaking to Dan Wottoon on his talkRADIO Drivetime show, she said: “We haven’t seen each other for a very long time or spoken for a while.

“I’m glad for him. It’s none of my business. He’s getting on really, so, good. It’s terrible that people have to hide who they are.”

She continued: “I feel for his wife. Steph’s a lovely girl and, you know, that’s difficult – as I’ve been talking about difficult transitions and processing stuff for me, it will be the same for her.”

Why did Fern Britton leave This Morning?

Back in July, Fern insisted she left the ITV show after being “treated poorly”.

She explained: “I began not to enjoy it so much and the morning I resigned, I didn’t know I was going to resign.

“Something happened and I thought, ‘That’s it really’ and I walked away and resigned.

“I was treated pretty poorly, actually. And after a while I just thought, ‘Sod it’.”

At the time, there were rumours that Fern had quit because she was paid less than Phil.

She added: “There was also a persistent rumour that I left because Phillip was being paid more than me and I always say to people, ‘Why would I leave a show to go to nothing if I was worried about money?'”