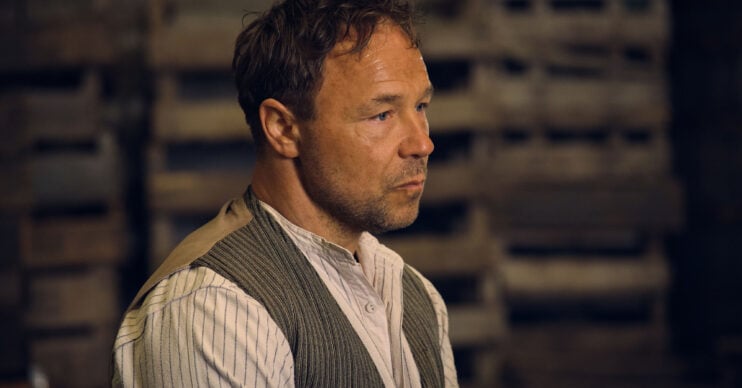 The esteemed actor admitted to some nerves setting in

He stars as Haydn Stagg, a man caught stealing from the Peaky Blinders gang – something that is usually punishable by death.

Tommy Shelby discovers that dockworkers are stealing opium “by the bucket load” from the Salt House Docks in Liverpool.

Union convenor Haydn Stagg is organising the sale of the opium.

However, when Arthur Shelby travels to Liverpool to give Haydn a PB beating, Haydn somehow manages to talk his way out of it.

A WWII veteran like Tommy and Arthur, he knows exactly what to say to Arthur.

The Time star spoke of his joy to be working with Cillian Murphy as he appeared on the Chris Moyles Radio X show.

Read more: Will there be a Peaky Blinders film? Lastest cast, plot and release details

“To the extent, Chris, where there was a couple of moments I had to pinch myself a couple of times because I was sat there in a scene with him, doing a rehearsal and stuff and I’ve kinda gone, ‘Ahh that’s Tommy Shelby!'”

Stephen’s wife Hannah, alongside him for the chat, joked that Stephen and Cillian “were fan-girling each other so badly” on set.

Asked by host Chris whether he freaked out at all, Stephen said he had a method to curb his nervousness.

“I had a proper look round and then it was like, ‘Alright lad, best put your footy boots on here and your shin pads, let’s get ready, here we go, on the pitch!’. But at first [it was like], ‘Ok, oh wow!’”

Read more: Are Peaky Blinders real and what does the name actually mean?

Leave us a comment on our Facebook page @EntertainmentDailyFix and let us know what you think of Stephen Graham in Peaky Blinders season 6.