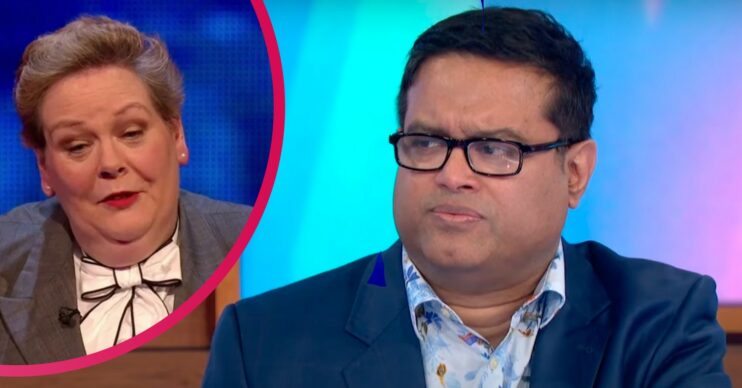 The Chase won the Best Daytime category at the BAFTAs

Paul Sinha was comforted by his The Chase co-star Anne Hegerty after he teared up on stage at the BAFTAs last night (Sunday, May 8).

The heartwarming moment was shown on Twitter yesterday after being axed from the TV broadcast.

The Chasers have something new to brag about; their very own BAFTA! 🏆 @ITVChase pic.twitter.com/bXQ2E4KyGy

The Chase wins at BAFTAs

During last night’s BAFTAs ceremony, The Chase won an award.

The hit ITV show came out on top in the Best Daytime category.

It went up against the likes of Moneybags, Steph’s Packed Lunch, and Richard Osman‘s House of Games to emerge victorious.

Upon winning, some of the Chasers went up on stage to accept the award.

Paul was joined by Mark Labbett (The Beast), Jenny Ryan (The Vixen), and Anne (The Governess) on stage to thank the academy and viewers.

And things got a little emotional for Paul, who had to be comforted by Anne at one point!

Mark was first to the mic upon reaching the stage following The Chase’s win.

“I got here first, I’ve got the longest legs,” Mark said. “In case you don’t know, six foot seven, available for panto, I make a hell of a bad guy.”

He then handed the BAFTA over to Paul, who called up the director, Michael Kelpie.

Kelpie explained that they really hadn’t expected to win the award – so much so that Bradley Walsh wasn’t even at the ceremony. Instead, he was away watching the football!

As Kelpie went on to say how proud they were to win a BAFTA, Paul could be seen wiping his eyes. He could then be seen turning to Anne, who gave him a quick hug.

However, the moment was axed for the TV broadcast of the ceremony, meaning viewers didn’t get to see the touching moment between the co-stars! Thankfully, it was later uploaded to YouTube and Twitter.

This morning, Paul addressed the fact that The Chase’s acceptance speech had been axed from the TV broadcast.

“The day after, and it stings a little to be excluded from the main BAFTA show,” he tweeted.

“I realise that a certain anti daytime snobbery will always exist, but a cursory glance at viewing figures will show how well many shows are holding up, against more prestigious productions,” he added.

Plenty of Paul’s followers showed their support in the replies.

“Daytime telly’s an entertainment lifeline for so many, and has been a crucial mood-lifter through the darkest days of the pandemic. Everyone who’s involved in producing daytime TV, in any capacity, hold your heads high,” one wrote.

“Very strange choices to leave out, no disrespect to other categories but as you say, the shows left out are some of the highest views on TV and what’s more, huge daily constants/lifelines for many,” another said.