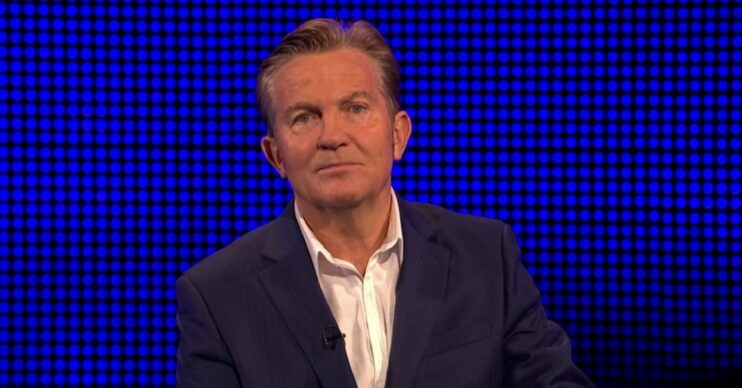 Were they truly deserved? We think so!

Presenter Bradley Walsh is well loved for The Chase, and it’s not just his hosting that has viewers hooked.

Fans love the TV star’s antics, which sometimes include the odd light-hearted telling off for contestants.

We round up a few of Bradley’s finest moments.

Bradley Walsh likes The Chase contestants to be patient

On one episode last year, Bradley teased that a contestant was being a bit impatient when she answered before he’d finished asking the question.

The star was asking Melanie which Elvis Presley song was inscribed on the side of Freddie Starr’s coffin, and had only said two of the options when she answered.

“You can’t do that, it is against the rules!” he added.

The jumping in issue has come up before.

Last year it happened with a contestant called Karoline, who interrupted because she was “excited”.

“I’m not having it… I’m treated with no respect on this show,” Bradley replied.

Fans were tickled when Bradley actually pulled one contestant aside for a mock telling off.

Christine had been enjoying a bit of banter with the TV star, and had been teasing him.

Leading her to one side as she giggled, Bradley said: “You better watch it, Christine. Come on here, making a fool out of me, love.”

And this year he actually told a wannabe to “settle down”.

A man named Bob was seriously enthusiastic when he was given a science question, correctly answering “chemistry” and then launching into a long explanation about it.

“You could have just said it was chemistry!”

One woman got short shrift when she whacked the button before Bradley had finished reading out the question.

The answer was one of three Hollywood stars, and the contestant told Bradley she was picking “the only man I love more than you”.

But he snapped back: “I’ll tell you something now, I don’t care how much you love him more than me, you cannot press your button until I finish the question!”

Bradley’s put downs have also seen the tables turn, with him being the one told off.

During one instalment he and contestant Becky were quibbling over whether a question about who introduced vanilla to Europe was related to history or geography.

But Becky told him: “Bradley it’s not a laughing matter.”

The presenter may have been being kind when he told one teenager he was good for his age – but viewers thought it was a bit cheeky.

Some fans said the star was being “patronising” when he told 19-year-old Lewis he was a “good player” for his age.

Bradley has also been a bit cheeky on Beat The Chasers.

Viewers were stunned when he made an X-rated joke after a contestant named Liane –  a former Transport for London worker – revealed that a jar of bull sperm was among the things that had been lost on the Tube.

“It’s easy to come by,” he quipped, raising some eyebrows.

The Chasers have been on the receiving end too

It isn’t just the contestants who’ve had a telling off from Bradley – he’s had the odd pop at the Chasers too.

He had a joke at Anne Hegerty’s expense when a Shakespearean quote came up.

Bradley had asked what the quote – “There’s a divinity that shapes our ends, Rough-hew them how we will” – meant, and Anne offered up quite a long explanation.

But Anne told him: “Well, don’t ask next time!”

One contestant called Dan got a bit of a telling off after he tried to tell Bradley how the game worked.

The presenter had commented on it being the end of it for a full house at that point, but Dan chimed in: “I’ve still got one more.”

Bradley quickly shut him down saying: “I know! Settle down! I know what the game is, I’ve played it many times.”