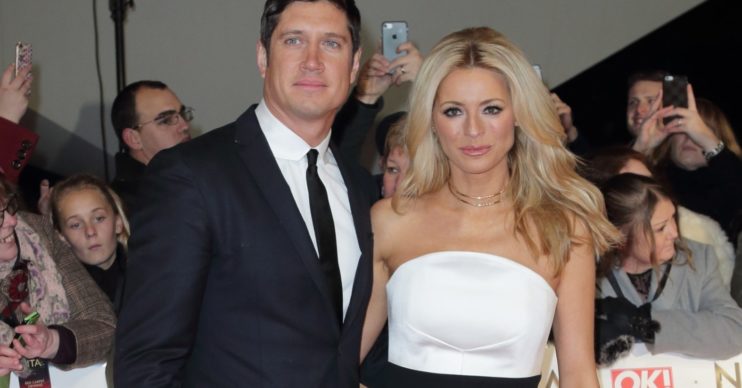 The presenter was caught sexting Rhian on more than one occasion

Glamour model Rhian Sugden has revealed she regrets causing issues in Vernon Kay and Tess Daly’s marriage after sending a string of flirty texts to the presenter.

The sexting scandal first broke in 2010, with the pair later reconnecting in 2016 – leaving Tess devastated.

Now, Rhian, 33, has admitted she regrets the situation, having cried over the incident in an upcoming documentary.

Opening up on FUBAR Radio, she said: “Yes I have a few regrets.

“Obviously, the whole Vernon Kay scandal, that’s what I cry about in the documentary actually. That was a massive regret.”

Despite some regrets, Rhian says she’s finally embraced her former Page 3 past.

She added: “But I’m past the point of no return now.

“My boobs are all over the internet, so I’ve just got to embrace it haven’t I?”

What happened between Rhian and Vernon?

Rhian and Vernon’s flirty exchanges came to light in 2010, with the model later claiming he also tried to secretly meet up with her in a hotel room.

The scandal blew up again in 2016, as it emerged that Vernon, 46, had been back in touch with the former CBB star.

The father-of-two penned an explanation of his actions, saying: “I recognise how it may look when messages are pulled out of context but there was never any inappropriate intent to our communication.

“I was merely trying to find answers to questions I’ve had since 2010.”

Rhian has previously been vocal about how she has been vilified, whereas Vernon has apparently been let off the hook, saying: “He got drunk and sent inappropriate text messages to me.

She had more sympathy for Tess, telling The Sun: “I just think, poor Tess Daly getting all this attention again for no reason.

“If we had a full-blown affair I’d understand, but text messages from 2010 is a bit much now.”

How did Tess react?

Following the scandal, the Strictly host revealed that her relationship with her husband was a “work in progress”.

In a candid chat with The Times, she said: “Marriage is a work in progress. Vernon and I are just people, at the end of the day.

“All marriages have their moments.”

Rhian has since settled with former Coronation Street actor Oliver Mellor, with the couple currently trying for a baby using IVF.